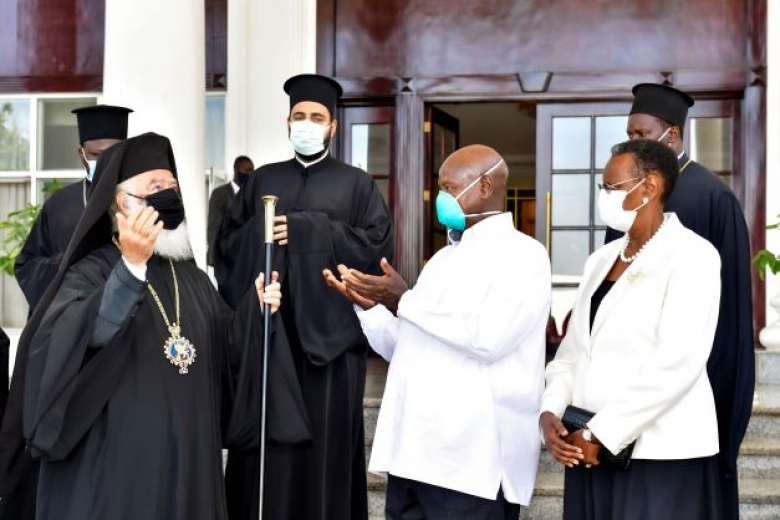 President Yoweri Museveni and the First Lady and Minister of Education and Sports Janet Kataaha Museveni have today received the Pope and Patriarch of Alexandria and All Africa His Beatitude Theodoros II who paid a courtesy call on him at State House Entebbe.

The visiting Beatitude is in the country to condole with the people of Uganda and the followers of the Orthodox Church in particular upon the death of the late Archbishop Yona Lwanga and to commemorate 40 days after Lwanga’s death on September 5 in Athens, Greece.

His Beatitude was accompanied by a delegation of Bishops who included His Eminence Metropolitan Makarios, the Archbishop of Nairobi in Kenya, His Eminence Innocientios Byakatonda the Archbishop of Burundi and Rwanda,  His Grace Neophitos Kongai the Bishop of Nyeri and Mt. Kenya, His Grace Silvestros Kisitu the Bishop of Gulu and Eastern Uganda and Archmandritellunga Musunganyi Chariton the patriarchal Vicar Diocese of Goma in the DRC.

The Beatitude Theodoros II told President Museveni the history of the Orthodox Church whose followers are estimated to be over 350 million world-wide.

The Orthodox Pope who has been to Uganda 6 times expressed his love for the country pointing out that the mission of Orthodox in Africa starts in Uganda.

“One great person who inspired us was our first Bishop Obadia who was the grandfather of the late Metropolitan Yona Lwanga. Uganda is considered the mother of Orthodox Mission in Africa and we are lucky to have a good President who loves us and protects us,” he said.

He pledged to send through the Uganda Embassy in Rome 2,000 covid-19 vaccines and continue to mobilize more vaccines for Uganda.

President Museveni thanked the cleric for coming to commemorate the death of Metropolitan Yona with the people of Uganda and commended His Beatitude Theodoros the 2nd for the vaccines.

The Orthodox Cleric is today proceeding on his pastoral visit to Bukoba and Dar-as-salaam in Tanzania and will later continue to Cairo in Egypt.