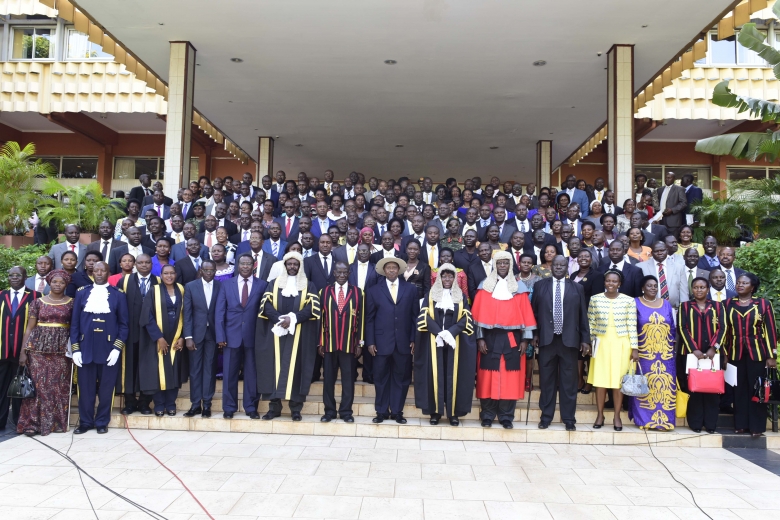 President Yoweri Museveni has said that the National Resistance Movement (NRM) Government’s goal is to promote manufacturing in order to ensure increased employment opportunities for the youth in the country.

The President made the remarks today at Serena Conference Center in Kampala in a State of the Nation Address that also marked the State opening of the First Session of the 10th Parliament.

“We have a surplus of 100 megawatts of electricity between 6:00 p.m. and 10:00 p.m. We have another surplus of 500 megawatts after 10:00 p.m. Electricity has been expensive because of the high cost of Bujagari hydro power station. The future electricity from Karuma and Isimba dams will not be expensive and it will cost only 4.6 American cents per unit and 4.8 American Cents per unit respectively,” he said.

The President said that having taken that measure the country will be able to attract more investors. He revealed that with more electricity generated, a unit of power should not cost more than 5 American Cents whereupon the manufacturing sector should feel relieved.

President Museveni also directed that uniforms for the Army, the Police, Prisons, the Uganda Wildlife Authority and for medical personnel should be locally made. He said that he had directed the Engineering Brigade of the Uganda People’s Defence Forces (UPDF) to build an Industrial Park. He observed that the venture would ease the work of investors towards establishing their operations. He said that he would not tolerate delays of more than 2 days for investors to start up their processes.

He informed the Parliament and the nation at large that cars are about 25% cheaper when assembled in Uganda saying this was the NRM Government’s strategy to stop hemorrhage. He added that the strategy of promoting local industries would ensure jobs for the young people in the country saying that Uganda stands to benefit from the creation of 45,000 direct manufacturing jobs. He cited Ethiopia as an example and noted that country employs 160,000 people in the motor vehicle sector. He maintained that it is not proper for the country to lose the US$500 million that she generates from coffee per annum by importing goods that could be manufactured locally. He, therefore, described the practice of imports as suicidal and called on the people of Uganda to stop it. He revealed that the NRM Government has continued encouraging importers to become distributors for locally manufactured goods.

President Museveni said that Uganda has taken up the measure in collaboration with the rest of the East African countries. He expressed strong optimism that once the strategy is implemented, the growth rate of Uganda would expand from the current 5% to double-digit rate. He emphasized that the NRM Government has put emphasis on the production of coffee, tea and fruits because those products have high demand on the international market.

Mr. Museveni also informed the country that the Government would capitalize the Uganda Development Bank adding that the move would enable the customers of that institution to access loans at low interest rates with particular focus on the agricultural and manufacturing sectors.

“Uganda was at the point of take-off given the reasons I have highlighted. I have been engaged continuously in the struggle for our people and economic recovery for the last 50 years,” he said.

He informed the nation that with the proven reserves of 6.6 billion barrels of petroleum, the resource will help the country to move easily in areas of roads, rail, electricity, irrigation, education and health.

Officials from the East African Community, the Speaker of the Kenyan Parliament, Rt. Hon. Justin Muturi and that of South Sudan, Rt. Hon. James Wani Igga, among other guests, attended the ceremony.