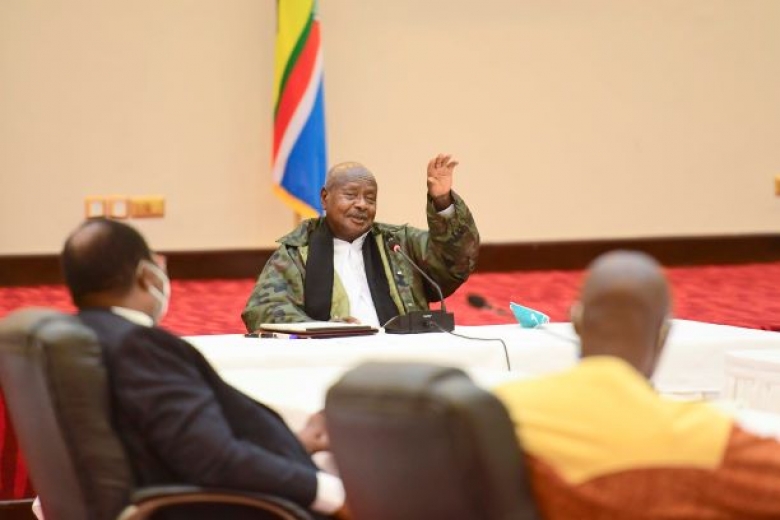 President Yoweri Museveni has held a meeting with the EAC Political Confederation Constitution Drafting Committee that was seeking guidance from him over the consultation findings gathered from the six partner states.

The Chairperson of the committee is the former Chief Justice of Uganda Justice Benjamin Odoki.

Speaking to the committee of constitution making experts, Ministers and officials from the partner states, President Museveni noted that for the EAC to form a confederation, there are initially three major reasons to consider; prosperity of the ordinary people by gaining from the production of goods and services; enhanced market integration, and to have a strategic security position of defending the sovereignty of the confederation including the factor of partner states fraternity.

He said there is a need for the promoters and stakeholders to grasp the idea of the confederation quickly.

“The business community should also support the integration to combine elements of a common market to enable people to produce and sell within the region,” he said.

He advised the committee that another crucial element to consider was to assume a common citizenship in the confederation, saying that there is a possibility of veto where there is a disagreement.

Responding to the funding of the constitution making process that required US$4 million, the committee said it had received US$500,000 and now needs US$3.5million.

President resolved that since the partner states cannot share the cost equally, Uganda will contribute US$600,000.

“At the same time, the contribution cannot be equal”, he said, and advised that for the union to succeed, no partner state should feel oppressed saying that unity solves many problems.

He further noted that it is better to say that those who want to move in support of the existence of the confederation, should move on.

The Chairperson of the committee, Justice Benjamin Odoki said that the committee was doing its final consultations in Uganda and will report to the President on the progress and seek further guidance.

“We are here to seek for your wise counsel and guidance on the smooth path for effective compilation of the constitution,” he said.

He pointed out some of the hindrances to the exercise as the outbreak of Covid-19 and financial constraint.

The Minister of EAC Affairs Kahinda Otafiire said that the team of experts interacted with local leaders across the country including in the Central Region, Mbarara, Arua, Gulu and Mbale to find out the key components of governance principles of the confederation.