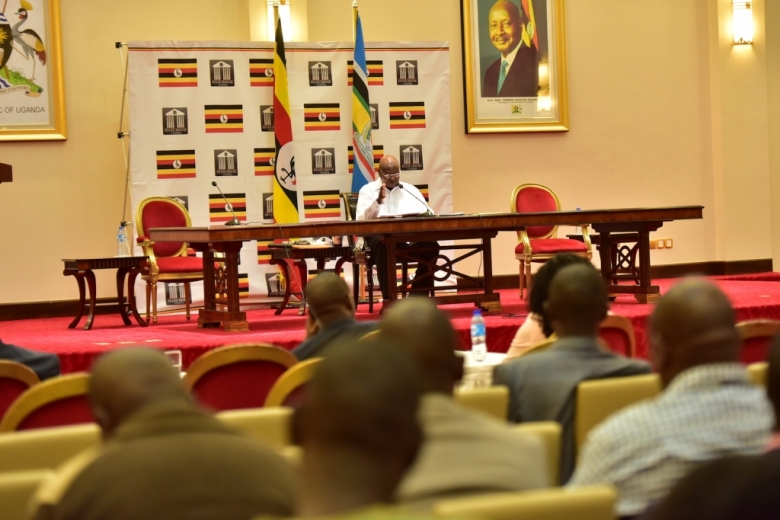 President Yoweri Museveni has said that Uganda is on the ascent and that nobody will destabilize it no matter how hard they try.

President Museveni made the remarks last evening during a press conference held at State House Entebbe to address the nation on a number of issues such as security, employment and the general state of the country’s economy.

The President said that Uganda has very powerful internal forces that would combine to defeat the unrest being fanned by some opposition people with the backing of foreigners.

“With the UPDF, we fight in spite of low pay; with the NRA we fought long and hard in spite of no pay at all.  That is why Uganda has no refugees outside our borders and doesn’t need the UN to defend her.  The UPDF fighters, imbued with the spirit of patriotism, defend Uganda,” he said.

The President said that contrary to what some people want to portray to the outside world, Uganda is a safe haven for 1.4 million refugees from the neighboring countries of the Democratic Republic of Congo, South Sudan, Somalia, and Burundi, among others.

On the issue of urban crime that has seen death of Moslem Sheikhs, Joan Kagezi, Sheikh Maj. Mohammad Kiggundu, AIGP Felix Kaweesi, Susan Magara, MP Ibrahim Abiriga and the latest being Police Officer Muhammad Kirumira who was gunned down last Saturday night, the President said that there has been a problem of weak intelligence but government is working to strengthen intelligence through the installation of cameras and deployment of security personnel.

“I have ordered 24,000 LDUs for Kampala and Wakiso areas to man these centers and ensure that total peace against crime is restored,” he said.

Caution to the media

President Museveni also called upon the media to behave professionally in the execution of their work. He said although the media has always reported in an untruthful manner about the government, Ugandans have always rejected their biased reporting and continued to support and vote for the National Resistance Movement.

“There have been massive wins in the recent LC1 and Women Council Elections,” he said. He advised the media to be objective in the dissemination of news.

Regarding alleged torture of MPs, the President said that the matter was in the courts of law and that people, including the media, should wait for the investigations and the law to take its due course.

President Museveni said that government has already expended efforts to empower the youth through skills’ training to rescue them from the indiscipline of politicians who give foreign money to the youth through NGOs to burn tyres on the roads, throw stones, commit arson, rig elections and to beat women.

“Sometimes, our youth go into these criminal projects because they want money.  They do not enjoy doing this.  I have this information on good authority.  Many of the young people have some education or even good education but they have no jobs, no property and no capital,” he said.

Mr. Museveni said that government has deployed efforts to empower the youth to take part in the processes of churning out products for import substitution and export promotion.

“These youth are not a problem but an asset. The purchasing power of Uganda is growing.  If our youth are helped to produce goods, Ugandans will buy them; or they will be bought in the region; or, if the quality is assured, those goods will go to external markets,” he said.

The President said that NRM legislators are working with him to ensure that funds are available to expand projects already started with the Girl Child in Kampala, in Najeera, Rukungiri, Luwero and other areas.