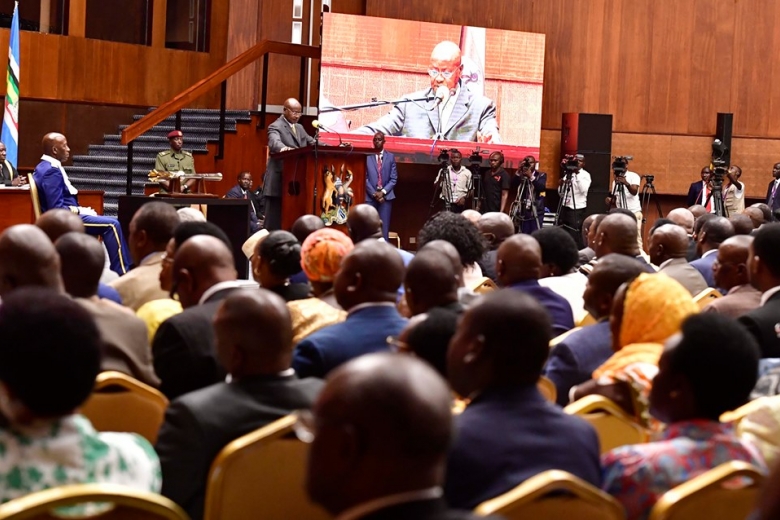 President Yoweri Museveni has projecting that Uganda’s economy will grow and develop by at least 7 percent in the medium term. He further said it will grow by a higher percentage now that the country has sorted out key constraints to growth that included improving the road network and availing enough electricity, among others.

Addressing Parliament at Kampala Serena Hotel International Conference Centre in Kampala, the President said that to propel the country’s economic growth even further, government is focusing on promoting industrialisation especially in the agro-processing sector, light manufacturing and mineral processing with a view to widening Uganda’s export base.

Mr. Museveni also said that focus will be put on increasing agricultural productivity by investing in quality inputs, extension services, storage facilities, market access and capitalising Uganda Development Bank to avail cheap credit to those in the agricultural sector.

He told the country that to develop the economy further, the NRM Government will strengthen the local content so that Ugandans can be integrated into wealth creation, improve efficiency in the execution of public investment to improve the returns on investment especially in the areas of energy, transport, agriculture, tourism, water for consumption and production, education, harness the benefits of regional integration and improve labour productivity through skills development.

He added that government is also expediting the commencement of oil and gas production revealing that works on the oil pipeline and refinery will be starting soon. He told the country that to expedite the industrialisation agenda, the government is prioritising investment in Industrial Parks in several parts of the country that have seen many large and small industries spring up in Uganda.

On international trade, the President said that the country’s exports’ revenue earnings have grown by 8.2% resulting in Uganda’s balance of trade getting better. He, however, singled out the high cost of lending as one big challenge to the country’s growth adding that government was adding Shs.103 billion to the Uganda Development Bank this financial year. He informed the people of Uganda that with further guaranteed financing from the African Development Bank (ADB) and Exim Bank of India, Uganda will be able to provide cheap loans for at least the crucial sectors of the economy.

He used the occasion to warn Ugandans against the continued fragmentation of land on account of primitive inheritance rites that, he said, had literally crippled land productivity. He, therefore, appealed to all leaders: political, religious and cultural, to take it upon themselves to sensitize the masses about the danger posed by the continued fragmentation of land which he said will plunge the majority of the population into abject poverty.

“What kind of leaders are we when the population continue to destroy our most valuable resource - ‘land’ - when we are watching and not advising them,” he observed.

“The biggest problem of our people is that they want to live the traditional way in a modern setup. They simply need guidance and we can’t call ourselves leaders if we can’t do that,” he added.

Mr. Museveni also castigated the continued encroachment on lakes, rivers, swamps, and forests and asked those doing it to leave those areas peacefully. He added that government will help resettle them. He directed Chief Administrative Officers and Sub-County Chiefs throughout the country to ensure that this is implemented; warning that failure to have this realized will make them risk dismissal from their jobs.

Regarding electricity, the President said that Uganda has made great strides in the sector adding that it will soon have the capacity to generate 2,300 megawatts by 2020. He said that in the minimum terms, the country aims at producing 17,000 Megawatts from hydropower sources that will later be supplemented by the nuclear power development.

On the issue of transport, the President said the Government revitalized  Uganda Airlines without borrowing and two aircrafts arrived in the country in April this year with two more planes slated to be received in the country in July and September respectively this year. He added that the fleet will be boosted by Boeing planes that will be received in 2020 and 2021 respectively.

The President disclosed that plans have been finalised to start the construction of the standard gauge railway along with the rehabilitation of the old railway system. He said that the development of the railways’ sector will be coupled with continued investment in the road sector and betterment of water transport.

President Museveni reported that Uganda continues to make great strides in the education sector with emphasis on science, technology and innovation. He, therefore, asked Parliament to support government in this direction.

Turning to the health sector, the President said that a lot of success has been achieved but advised the population to look more on preventive measures as most of the load of the diseases that afflict Ugandans, can be avoided through hygiene, proper nutrition and behaviour change, among others.

On regional integration, President Museveni emphasized to the national Parliament that ‘the search for Africa’s integration is a must’. He further stressed that all Africans must understand this because it was for their benefit economically, politically and strategically. He expressed happiness the East African countries are on the right track of total integration.