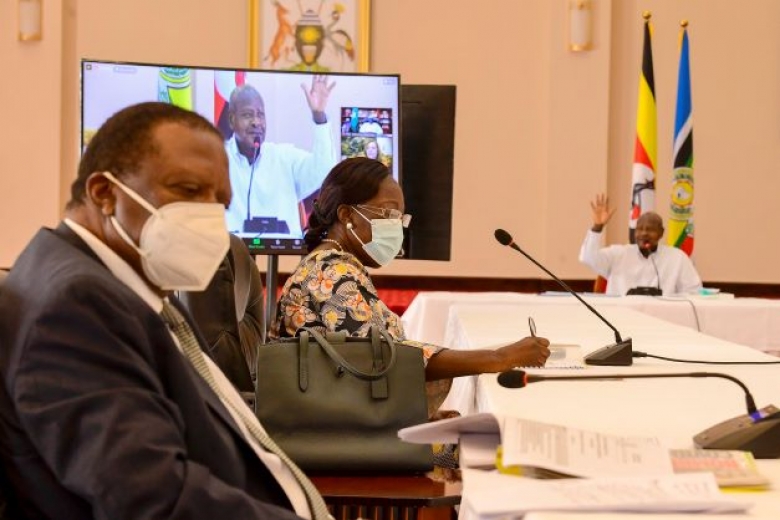 President Yoweri Museveni has urged African leaders to solve the issue of political and economic organization of Africa if they are to secure its future.

The President who is also the Champion of the Regional Integration in Africa was giving a keynote address and presiding over the official opening of a virtual ceremony to mark the 2021 African Integration Forum and Commemoration of African Integration Day. The virtual meeting was attended by Heads of State from Gambia, Gabon, Malawi, Congo and Uganda. It was also addressed by the Secretary General of the AfCFTA Secretariat, H.E Wamkele Mene and the Chairperson of the AUC H.E Moussa Faki Mahamat.

President Museveni said he has been dealing with issue of integration of Africa for the last 58 years actively as student leader, as freedom fighter and more recently as a leader of government and that he had identified three key issues that need to be addressed.

“The more buyers the better. It is not just integration as a slogan, it is integration in order to overcome poverty, under-development through production and therefore a big market. The whole purpose is to guarantee our prosperity,” he said.

“How is Africa going to be secure? You remember Africa was colonized and we suffered from slave trade. Why? Is it because we were cowards, or our ancestors were cowards and could not fight? No! They were brave but not well organized on a big scale,” he said.

President Museveni said if you work together, you have a bigger capacity to respond.

“Some actors in the world have been talking for some years about the four dimensional superiority. Superior on the land, superior at sea, superior in air and superior in space. For us we are just sitting here on earth like ants while some people are looking at us from space. Uganda, even when we develop, we can’t have a satellite in outer space. How shall we guarantee our security? Others are going to space. the Americans are there, Russians, Chinese, Indians etc. It is only us here on earth. Is that safe?

He said Africa is divided in four groups including the Niger Congo group of languages that has the Bantu dialect from Cameroon to South Africa. The Kwa group from South Nigeria and Ghana the Nilo-Saharan languages of Nubians in northern Sudan and Southern Ethiopia (Oromos) and Chad, the Afro-Asiatic group including the Amhara, Tigrinya and the small language groups in South Africa popularly known as the bushmen

“The people you are talking about are either similar or linked. There is a basis for uniting them. We are very lucky it is easier for Africa to unite than Europe. It is easy to reconcile in Africa because language doesn’t belong to any ethnicity. Like Swahili, which is a none ethnic language, was developed by Africans when they met at the coast of east Africa, it belongs to no tribe, it is neutral. All these people can use,” he said.

The President wondered what the present generation of Africans is trying to achieve.

“Are we trying to build a Latin America in Africa or United States of America in Africa,” he wondered before comparing the 13 British Colonies that united to form the core of USA today and the Spanish colonies in the South.

“The Americans have built the most powerful country in the history of man kind, economically, militarily..etc. In South America, the Spanish colonies broke away from Spain but instead of uniting remained scattered. You can see the results in USA; strength prosperity, stability. While in South Americ; poverty, instability misery,” he said.

The President said today South Americans are walking on foot, running away from poverty to the USA despite having more natural resources than the north.

“You see leaders keeping them away. Even building a wall to keep away desperate people. But South America is richer than the north with forests, tin minerals, amazon river, agriculture land, petroleum, etc. It is rich in terms of natural resources but politically disorganized,” he said.