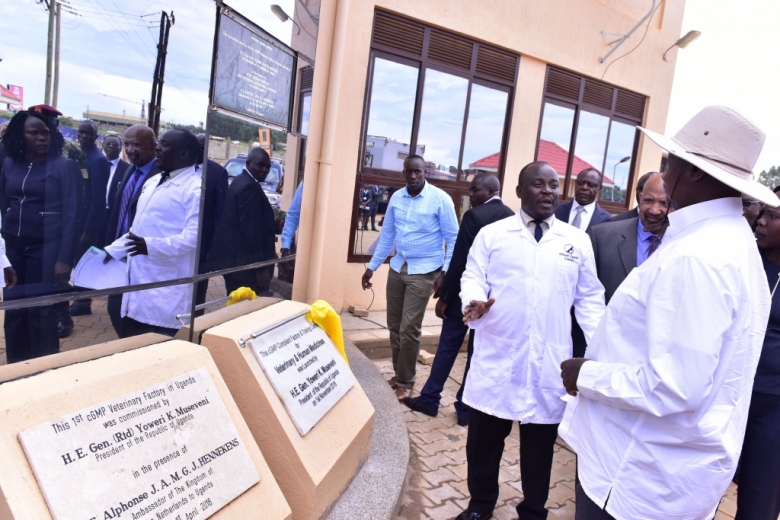 President Yoweri Museveni has said that the factories that are being built in the country are a testimony of the strategic National Resistance Movement’s development plans and policies.

The President said that from the beginning, the NRM has been telling Ugandans that they need to get themselves out of poverty and that the government has always come up with policies that show people how to get out of poverty.

He explained that the NRM government restricted forex trade and this helped to stop Ugandans from importing luxury goods like perfumes.

Earlier, Joseph Yiga, the owner of Steel and Tube Industries had shared his testimony of how the government policy of limiting use of foreign forex enabled him to move from importing perfumes to focusing on essential sectors such as construction.

The President said he was glad that people are now setting up industries and called upon investors to add value to their produce. He said government would work with the factories so that the products that are made locally, get market. “Government departments must buy what is produced locally and government will tax imports of things which are otherwise made locally here so that we protect our local producers,” he said.

On electricity outages, the President said that government would replace old lines with new transmission wires and transformers.

“We are producing enough electricity. It will soon be reliable and uninterrupted,” he said.

The Minister for Finance and Economic Planning, Matia Kasaija, said that the commissioning of the six factories was a milestone in Uganda’s journey to transformation. Evelyn Anite said the government was committed to attracting more investors in the country and creating employment opportunities for the youth.

The President began with the commissioning of Orion Transformers and Electrics Limited. At present, the factory produces 1500 transformers (2500 KVA/33KV) and switchgear annually, with an output of US$10 million. The company will also produce smart meters, wires and cables, LED lamps in the near future. Henry Liu, the General Manager, said that investment would help Uganda address its large demand of mid-sized transformers of 25 and 500kVa from the national grind and local industry.

At Toyota Uganda Limited Headquarters the President was told it employs 230 staff. The Managing Director Mahmood Omar said that the company was committed to serving Uganda for all its transport needs.

The President later commissioned the Alfasan Uganda Limited. Alfasan is a GMP compliant training center and factory for veterinary and human medicines. The US$23 million investment produces deworming, pesticide and vaccines among others.

According to the Managing Director Steven Birungi, the factory will produce 400,000 liters of liquid and 360 tones of drugs annually and have a turnover of US$15 million. The factory will employ 200 people, and export to 15 countries on the African continent. After its commissioning, President Museveni flagged off the first batch of their medicine.

President Museveni commissioned Steel and Tube Industry a US$200 million factory produces a wide range of steel products for construction and building industry. The current installed capacity for the factory is 360,000 Metric Tonnes and it processes 190,000 metric tonnes of steel using raw materials from South Africa, Russia, Japan, India and Taiwan. After a tour of the factory, the President flagged off 5 trucks taking products to Kenya, Burundi and South Sudan. Joseph Yiga, the founder and Chairman of Steel and Tube Industries gifted President Museveni with two silos to use on his demonstration farms.

The President then commissioned Luuka Plastics and Packaging. The factory exports to Rwanda, Burundi and Democratic Republic of Kenya.