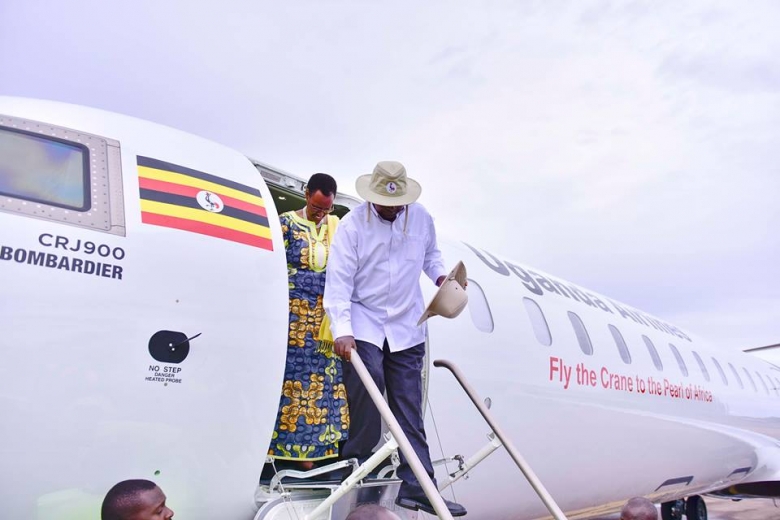 This morning, First Lady Janet and I led Ugandans to receive the first two of the CRJ900 Bombardier planes which will form part of the fleet for our revived national flag carrier, the Uganda Airlines.

When you are mingling millet, you must wait for the water to get to the right temperature before you add flour. Wrong timing would mean half-cooked millet. It is same with the science of management. The temperatures are now ripe for the airline's revival.

The old Uganda Airlines died and in the African culture when people die, they are buried. But when the old die, new ones are born. This is the new baby. I was among the undertakers at the burial of the old airline but I am also among the midwives delivering the new baby.

Why do I think the new baby will survive? There are four clientele constituencies that will support this business; Ugandans in the diaspora, families of Asians of Ugandan descent expelled by Idi Amin, our business people here who travel a lot and the tourists.

For the tourists, they have been coming to Uganda despite the inconvenience of making stops in Addis Ababa, Nairobi, Kigali or Dubai. It shows they love Uganda. It will be more convenient now when we have direct flights to London, Dubai, Guangzhou and other cities.

This airline should also help our push towards attaining middle-income status. Ugandans spend $400m annually on air travel. At least, some of this money will now come to our own airline, just like we shall check such capital flight when we have our own specialized hospital in Lubowa.

That said, my ideological orientation still believes we can have an East African airline if we amalgamate all national airlines. It partly explains why I delayed the revival of Uganda Airlines but our neighbours did not see this, instead some of them were discriminating against Ugandan travellers.

The Bombardier Vice President referred to Uganda as fabulous. Unfortunately, some Ugandans are determined to destroy this fabulousness. They destroy forests, invade wetlands. You have seen the rain has not been good this season. But the Bible says what you sow, you reap.

I thank the Ministry of Works officials, the interim board, the taskforce, workers of the airline and Parliament for making this happen. MPs were very supportive in appropriating money for this airlines. We have paid cash for these planes and will do the same for those we shall procure soon.

Finally, I thank Canada, which is trying to break the monopoly of US and Europe in manufacturing aircrafts. It is also good that we are supporting a Canadian company with whom we are related through the Commonwealth.