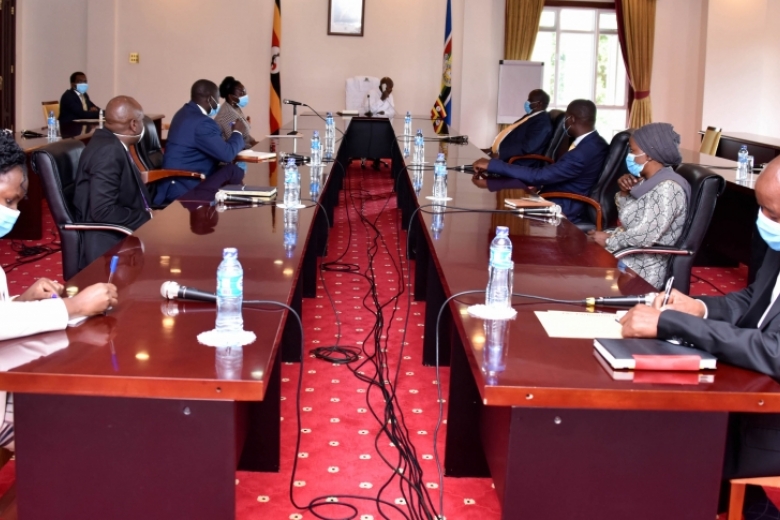 President Museveni has  agreed with the proposal of forming COVID-19 constituency task forces, but guided that the idea would further be discussed with the caucus and other Members of Parliament before it is put into effect.

The President was  meeting a committee of Members of Parliament comprising of representatives from NRM executive caucus and Parliamentary Commissioners led by Government Chief Whip, Hon. Ruth Nankabirwa.

“The idea of constituency task force can be discussed because sometimes the districts are too big to deal with such issues. We will have to discuss this idea with the other MPs, where the MP is the Chairperson and the accounting officer is the sub county chief. I totally agree with what has been pointed out and am aware that when the lock-down was announced, students and other people from the constituency invaded MPs homes because they wanted help with many things and so the MPs need the support, which should be institionalized. I welcome this proposal of the constituency task force,” he said.

The proposal sought to establish a constituency task force where Members of Parliament can directly be involved in interventions targeting their areas because the districts are too big to reach out to people’s needs and might not necessarily put resources to where they are needed. It also sought for the constitutional task force to be institutionalized and made a permanent structure for future initiatives and emergencies.

The proposal also noted that the aim of the Constitutional Task Force would be formulated with the aim of helping handle COVID-19 and post COVID-19 related cases, maintain linkages with the district and national COVID-19 task forces, mobilize and manage (financial and material) resources for the COVID interventions, and create awareness, behavioral change and capacity building for the constituents during the crisis.

The Government Chief Whip who is also the Woman MP for Kiboga district Hon. Ruth Nankabira appreciated President Museveni for having accepted the proposal, saying that this would help them to better serve, help and develop their constituencies during such a crisis.

“We came with this petition to the President such that he understands the pressures that we face during such a crisis. When the lockdown was announced the students who were stranded, people at the borders ran to their Members of Parliament, up to now the MPs are still receiving phone calls, medication and other things. I am glad that the President has listened to us and accepted our proposal,” she said.