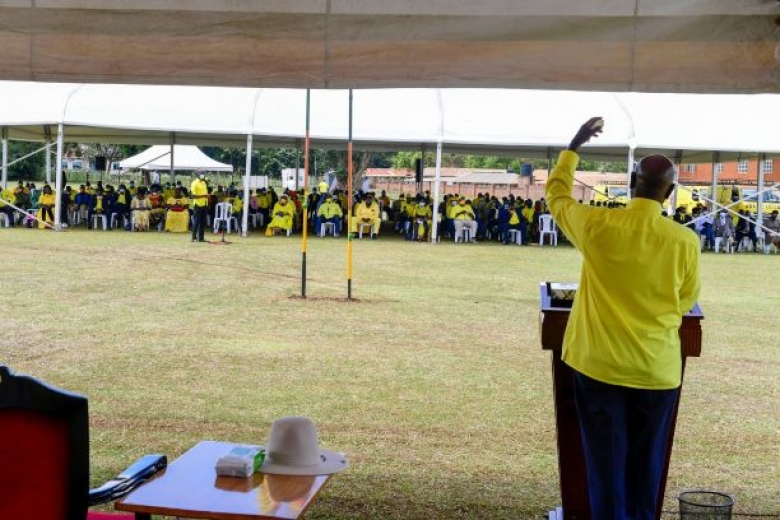 President Yoweri Museveni who is also the NRM Presidential Candidate has urged the NRM leaders to remind the people that it was because of wise policies of the NRM that the country has been able carry out a number of notable achievements.

Speaking during a meeting of NRM leaders and flag-bearers from Lango sub region districts of Alebtong, Amolatar, Apac, Dokolo, Kole, Lira and Oyam, President Museveni said that the decision to prioritize peace and respecting the private sector was the reason there are more investors in the country and this had gradually increased the tax revenue base

“I see here that the budget allocation to Lango sub region is about 272 billion in a year. In 1986 the tax collection in the entire Uganda was 5billion, with the discovery of petroleum in Uganda, more money would be added to the tax collection to further develop the country.

“It is now 14 years since we discovered petroleum and had not yet dug it out of the ground because we were still arguing with the oil companies. We have now finally agreed with them. These companies will spend 20 billion US dollars to dig it out of the ground. This will be additional money to the taxes we are already collecting,” he said.

speaking about cattle compensation in the areas of Acholi, Lango and Teso, President Museveni that the government would continue the cattle compensation programme but emphasized that this time, they would not use lawyers because some of them were conniving with some people in the Ministry of Finance to cheat the wanainchi and delay the process.

On the infrastructural developments in the region, President Museveni noted that because of the good road networks, the business between South Sudan and Uganda was growing. He noted that roads like Moroto-Nakapipirit had been well constructed without the need for external borrowing.

Mr. Museveni tasked the leaders to continue teaching people about the need to shift from subsistence to commercialized agriculture even as they carry out the mobilization.

“We thank you for the support in the infrastructural sector which has made Lira qualify for a city,” he said. He noted that the sub region still sought for his support in procuring value addition services and equipment for farmers to boost their yields and house hold incomes.

Before leaving, the President Museveni briefly met with a few NRM elders and flag bearers.