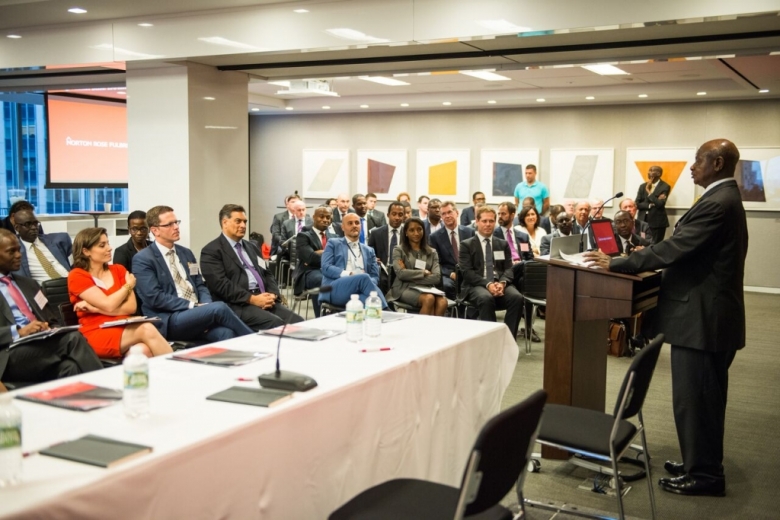 President Yoweri Museveni has told American investors that he would like President Donald Trump to prioritize economic infrastructure development to help lower the cost of doing business in developing countries.

The President was yesterday addressing the Uganda Investors Roundtable organized and hosted by Norton Rose Fulbright, a leading international law firm in the United States of America and the US chamber of Commerce in New York at the sidelines of the 72nd, session of the United Nations General Assembly.

When asked by moderators Ikenna Emehelu and Clare Karabarinde what he would tell Trump to prioritize, the President responded, “Economic Infrastructure development”.

The President said one of the challenges Uganda needed to tackle was electricity but the country did not get cooperation from the western countries in the 1960s, 70s and 80s.
“Western countries would only support social development such as schools and health centers but not economic infrastructure. If you support health and education but do not support the economic infrastructure how will I sustain the social sectors if the economy is not growing,” he said.

The President said it’s never too late for western governments and companies to participate both through soft loans to the government or develop them as EPP projects where the private sector works with the government.

“The aim of investing in infrastructure is to have low costs of production so that the private companies can make profit. Private companies should come and invest in manufacturing, services, hotels and ICT,” he said.

The President was amused when the organisers played his famous ‘You want another rap lyric popularly known as Mpenkoni’ before letting him answer more questions on investment opportunities in Uganda.

“Business is about two people; the buyers and the consumers. If you have got these two people then you have potential for good business. If I produce a good or service you need someone to buy it if you don not have enough buyers then you become bankrupt. That is why therefore people in US and Europe need to know about Africa. Africa is a land that is four times the size of the USA. The population of Africa is today 1.3 billion and will be 2.5 billion by 2050,” he said.

The President emphasized the need for market access for Africa pointing out blocks such as COMESA, EAC and SADC that are available for investors.

President Museveni said Uganda has got all sorts of investment opportunities including in agro processing, minerals including in the petroleum and gas sector, electricity sector and rail transport.

The meeting was attended by Uganda’s Minister of Foreign Affairs Hon. Sam Kutesa, The Minister for Finance Matia Kassaija and