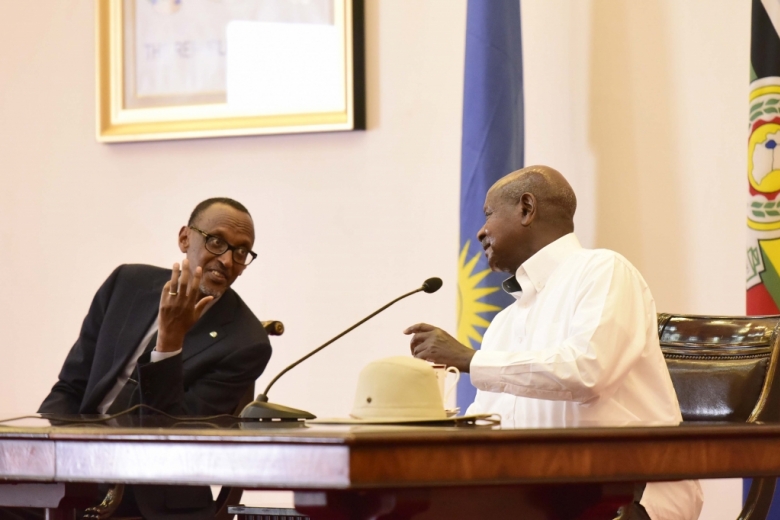 The Rwandan leader who is new African Union (AU) Chairman, was in the country on a one-day day working visit to brief President Museveni on the recent AU Summit in Kigali that resulted in the signing of the African Continental Free Trade Area by 44 AU member countries paving the way for the creation of one African market.

The other areas that the two Heads of State discussed included the railway line works, electricity supply, airline operations and security between the two countries and the region.

Addressing a joint news conference by the two leaders, President Museveni stressed the need for close cooperation between intelligence services of different countries in order to get facts and secure the region. He said that there was no fundamental conflict between Rwanda and Uganda adding that security agencies of the two countries must cooperate, make use of technology to solve security matters.

“A girl was recently kidnapped and killed and the suspect was in South Africa. I personally called President Ramaphosa and action was taken. People and countries involved in such matters, must work closely,” he said.

Mr. Museveni also said that it was beneficial for Rwanda and Uganda to cooperate in other areas like trade and infrastructural development as a way of fostering Uganda-Rwanda relations.

“Rwanda has gas; we have iron ores. Why should we import steel from Singapore? The Ministry of Planning should consider developing such a project with Rwanda,” he remarked.

Regarding the situation in neighbouring Democratic Republic of Congo (DRC) where an influx of refugees from there have come mostly to Uganda,  President Kagame, said that the solution was for the DRC to cooperate with the United Nations that has been in the DRC for decades.

“DRC is a big concern to everyone starting with the neighbours particularly Uganda. What we are seeing today is a regional, continental and an international matter. This was part of our discussion with President Museveni to see how best to help. The UN has been there for decades but we see no results,” he said.

On allegations that Ugandans in Rwanda were losing job contracts, President Kagame said the concerned institutions in both countries should get to the bottom of the matter because some issues were reported out of context