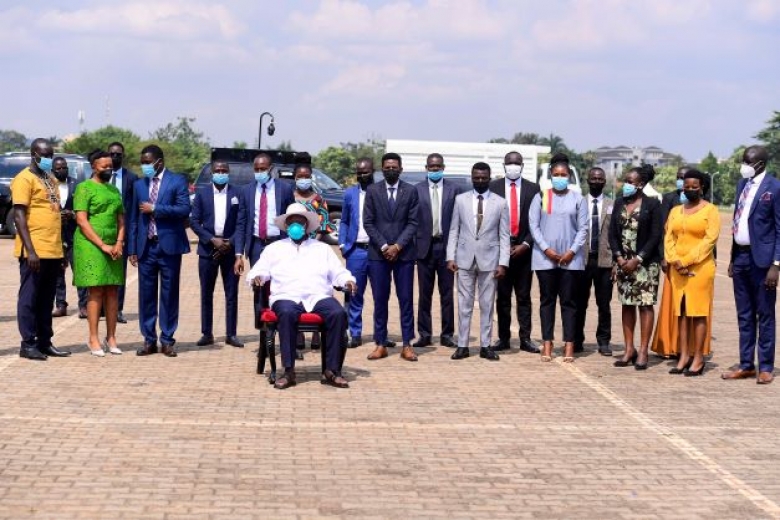 President Yoweri Museveni has called on leaders to step up their efforts of sensitizating the  youth to actively engage in economic production if they are to improve their standards of living .

“You the youth leaders should be clear, because if you are not, you are going to kill your own people.  Stop being polite to people who are not working. Stop wasting your time and engage in production to be able to live purposeful lives,” he said.

The President was today speaking during the commemoration of the International Youth Day at Kololo Ceremonial Grounds under the theme; Transforming Food Systems: Youth Innovation for Human and Planetary Health.

Uganda has one of the youngest populations in the world, with 78% of the country being under the age of 30. According to reports, in the next 20 years the world’s population is projected to increase by a further 2 billion.

President Museveni who made reference to his own personal journey ‘working while still young’ urged the youth to engage in commercial agriculture, adding that government jobs are so few and cannot employee all the youth.

The President urged the youth to engage in the four sectors of the economy, that is; commercial agriculture, industries, services and ICT. He noted that the NRM government has been very clear about wealth creation through these sectors.

Mr. Museveni highlighted deliberate programs such as peace and security, immunisation, education for all, skills and vocational training programs, infrastructure as well as wealth creation funds as government efforts aimed at creating condunsive environment to empower the youth.

On the issue of the COVID-19 pandemic, the President noted that the main target of the government is the survival of the people.  While he acknowledged that some businesses have collapsed, the President noted that the government through the Ministry of Finance will put in place measures to ensure a recovery process for those affected by the pandemic.

He appealed to the youth leaders to support the parish model to consolidate government efforts  of creating wealth and fighting poverty saying that the majority of the people live in villages. He said government is committed to putting more funds to fight poverty.

The Gender and Social Development Minister, Hon. Betty Amongi applauded the government for the creating a  favorable environment for the youth to work. Hon. Amongi noted that the surge in population was due to deliberate government programs to improve the health of its people.

The UN Resident Coordinator in Uganda, Ms. Susan Ngongi Namondo thanked the President for always prioritising the youth saying that Uganda is a youthful country. She noted that UN and other development partners have in place programs aimed at sensitizing the people in the fight against poverty in Uganda. She pledged the UN's total commitment to working with Uganda government and África in general for the common good of the people.