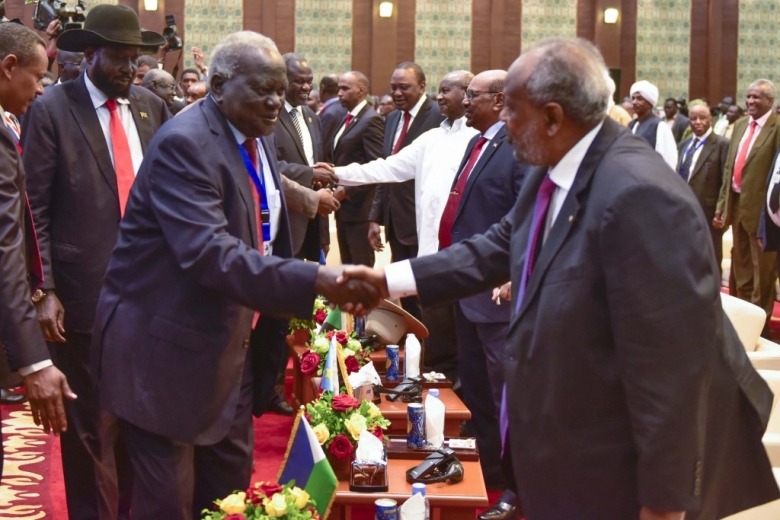 Joined hundreds of dignitaries at the Friendship Hall in Khartoum, Sudan, to witness South Sudan's parties sign a conclusive agreement on peace, security and governance.

As a guarantor to the agreement, it is my hope that this is the last pact we are signing and that the respective parties are serious and they don’t use the ceasefire as a tactical instrument of preparing for war.

We must also be mindful of political opportunism. Politics driven by opportunism has brought a lot of suffering to Africa and cost it development. In the last 58 years I have been watching the Africans here. There have been so many mistakes, so much suffering because of politics of opportunism.

Opportunism that takes advantage of identity. So much time lost, development stalled because of identity. People fighting because they are Muslims or Christians, Shia or Sunni. A lot of rubbish. We should be bold and stop being diplomatic about this.

Leaders should instead focus more on working for the fulfillment of their people’s interests like peace, health, education and creating conducive environment to do business.

Also, whereas political arguments and disagreements will always exist, I believe the right medicine for this is fair elections. When you argue, let the population arbitrate and choose whose argument they buy in a peaceful and fair election.

Finally, I am glad that the wrong peace-making architecture where some international players sought to blacklist and sideline South Sudan's neighbours from this peace process, was stopped.

In such a war, the first victims are the South Sudanese and then the neighbours. But these groups had said Uganda and Sudan must not be anywhere close to the South Sudan issue. Well, finally someone thought we could come in and help.