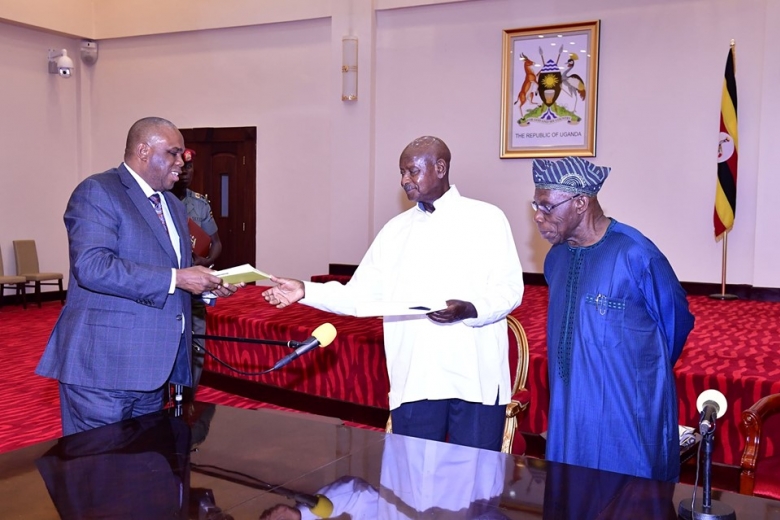 President Yoweri Museveni has witnessed the signing of a Memorandum of Understanding (MoU), between the Government of Uganda and the Africa Export-Import (Afri-Exim) Bank.

The ceremony that took place at State House, Entebbe also included the signing of an Agreement to host the Afri-Exim Branch in the country.

The Minister of Finance and Economic Planning, Hon. Matia Kasaija, signed the MoU on behalf of the Government of Uganda while the President of Afri-Exim Bank, Professor Benedict Oramah, initialed on behalf of the bank.

The Agreement to host the Afri-Exim Branch in Uganda was initialed by State Minister for Regional Affairs, Hon. Philemon Mateke and Professor Benedict Oramah.

Africa Export-Import (Afri-Exim) Bank, which has branches in West and Southern Africa regions, is now set to open a branch in Kampala to cater for the East African region.

Speaking at the ceremony, President Museveni expressed happiness that with the establishment of Afri-Exim Bank in the country, two deficits that impinge Africa – value addition and trade finance – will be addressed.

“Africa is slowly waking up. I am very happy that you chose Uganda because we are committed Pan-Africanists. When it comes to trade and social transformation, that is our ideology. We shall work very easily with them,” he said.

He thanked the bank for funding the construction of Lubowa specialized hospital and noting that the entity, when completed, will help the country save money that Ugandans have been using to seek for specialized treatment abroad in countries such as India. He added that he looked forward to working with the proprietors of the bank in the sector of coffee processing.

Former Nigeria President, Olusegun Obasanjo, thanked the Government of Uganda for having accepted to host the regional branch of the bank. He said the establishment of the regional branch of Afri-Exim was part of the five-year development plan of the bank. He assured President Museveni that coffee processing would be one of the first priorities that the bank would invest in.

Finance and Economic Planning Minister, Matia Kasaija, said the setting up of Afri-Exim Bank in Uganda would go a long way to support export and import trade through loans, establishment of credit facilities, job creation and expansion base of cash liquidity.

Prof. Benedict Oramah revealed that the bank will open business in October this year and launch its activities in November.  He reiterated that Uganda had been chosen to host the regional branch because the country fully appreciated the importance of hosting a strategic Pan-African investment.

“I thank you for your vision in knowing that these things that look simple have profound importance.  I believe the Kampala Office will foster strong relationships between Uganda and the private sector in financial investment,” he said.