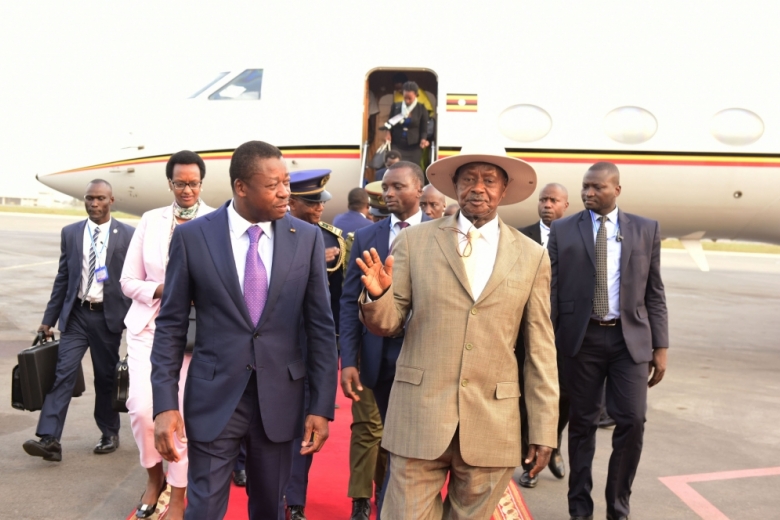 President Yoweri Museveni has arrived in the Togolese Capital Lome for a two-day France – Africa summit on drug trafficking and counterfeit medicines on the continent. The President arrived at the Lome- Tokoin Gnassingbe Eyadema International airport and was received by his host President Faure Essozimna Gnassingbe.

Seven African leaders from the Republic of Congo, Gambia, Ghana, Niger, Senegal, Togo and Uganda will sign an agreement for stronger legislation to criminalise the sale of fake drugs at a two-day summit on counterfeit medicines being held under the theme; “Fake drugs a real crime”.

The summit is an initiative of the Brazzavile Foundation, a charity organization based in the United Kingdom whose patron is HRH Prince Micheal of Kent and is led by Sir David Richmond. The Brazzaville Foundation is expected to lead to a “Lomé Initiative” to end the illegal trafficking and use of fake drugs, and also  help to combat a deadly trade that claims hundreds of thousands of lives every year in Africa and funds transnational crime and terrorism.

The foundation is managed by an international advisory board made up of highly distinguished individuals including Uganda’s former Prime Minister Amama Mbabazi who was at the airport to receive the President on behalf of the foundation. Other leaders to receive the president included ministers and officials from both governments and cultural leaders from Togo.

It is hoped that the leaders will sign an agreement for criminalising trafficking in fake drugs. The aim is to bolster cooperation between governments and encourage other African nations to join the initiative.

The world health organization estimates that every year, some 100,000 people across Africa die from taking falsified or substandard medication. According to reports, globally, the trade in counterfeit pharmaceuticals is worth up to US$200bn annually with Africa among the worst affected regions.

Weak legislation, poor healthcare systems and widespread poverty have encouraged the growth of this parallel — and deadly — market. Since 2013, Africa has made up 42 percent of the fake medicine seized worldwide. According to experts, the two drugs most likely to be out-of-date or poor, ineffective copies are antibiotics and anti-malarials.

The President who is representing the East African region will be making his presentation today. East Africa is one of the regions facing increased threats from drug trafficking and counterfeit medicines.