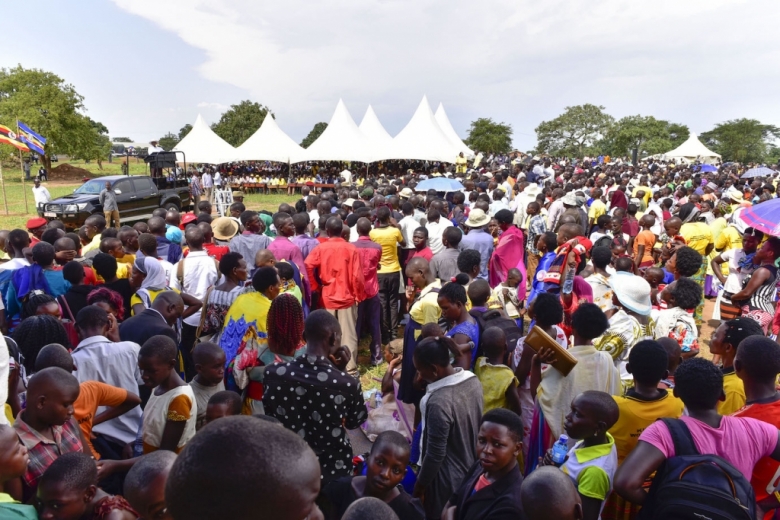 President Yoweri Museveni, currently on a countrywide tour to sensitize leaders and wananchi on wealth and job creation in order to banish household poverty, has thanked the people of Kwankwanzi District in Greater Mubende area of Central Region of Uganda for listening to the National Resistance Movement (NRM) advice of shifting from traditional agriculture to modernized calculative agriculture. He urged them to continue working even harder in order to defeat poverty completely from their households.

The President was addressing a wealth creation rally held at Nte`eyera Church of Uganda grounds in Kyankwanzi District.

“Sometimes when I give advice, some people think that I am telling lies but I thank you Kyankwanzi for listening. In the 1960s, I started teaching my Ankole people to shift from subsistence to commercial agriculture. The same message was preached here and I see now that people have woken up and are now making money. I will fully give them my support,” he said.

The President reiterated that those who are actively participating in commercial agriculture, should not be selfish with their knowledge, but teach others so that they can also get rid of poverty from their homes.

He advised people that have not yet participated in commercial agriculture and have small pieces of land to take three strides to get out of poverty that he enumerated as shifting from traditional to commercial agriculture, and using the four- acre model in which they can carry out dairy farming, fruit production, poultry and fish farming.

Turning to the environment , the President advised the people to desist from land fragmentation and instead embrace  creating family companies where family members can all have shares that can bring profits to them. He further noted that family companies would also help and stimulate the members who are very lazy to work.

“Land in Kabale is fragmented into very tiny pieces and now there is nowhere they can carry out agriculture. It is very wrong for you to fragment land and divide the family property. Make family companies like I have also done with my family,” he said.

President Museveni thanked the people of Kyankwanzi District for their support during the NRM liberation struggle. He handed over a dummy cheque worth Shs.150 million to Kyankwanzi SACCO.

During the rally, Buganda NRM leaders endorsed President Museveni as the Movement’s sole candidate for the upcoming 2021 elections.