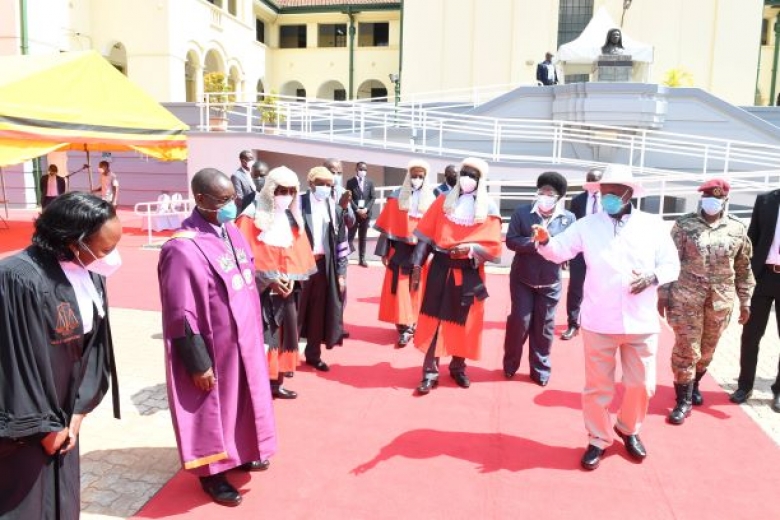 President Yoweri Museveni has said that he wants a corrupt free judiciary that has the peoples’ confidence and that ensures quick dispensation of justice.

“I want to see a corrupt free Judiciary. The people’s confidence in the courts of law is crucial. The Government is interested in seeing commercial cases especially those of investors and corruption discharged quickly. I am pleased with the arrangement of automating the courts through the use of technology,” he said.

The President was today speaking at a ceremony to open the new law year  - 2021, at the Uganda High Court grounds.

The event takes stock of what took place during the previous year and lays strategies on the way forward. It was attended among others, by the Speaker of Parliament Rt. Hon. Rebecca Kadaga.

President Museveni congratulated the Chief Justice Alphonse Owiny Dolo and the Deputy Chief Justice Richard Butera upon their appointments to the high ranks in the judiciary and expressed his confidence in them noting that they are officers who have got a long and good service record. He urged them to ensure that the people of Uganda get the justice they deserve. The President agreed with the judiciary that it would be appropriate to recruit more judicial officers in a phased manner.

He pledged to fulfill his promise towards improving the benefits of the judicial officers and to invite the Chief Justice for a meeting in order to discuss in detail measures that need to be taken towards improved service delivery in the judicial service.

He noted that government resolved to train a strong army capable of defending the country, building roads, providing electricity and expanding education because without these, the economy would not grow.

President Museveni agreed with the Chief Justices proposal of appointing a Chief Magistrate for every District and a magistrate in every constituency.

The Chief Justice Alphonse Owiny Dolo revealed that currently the service is constrained by a shortage of manpower. He noted that they only have 43 Chief magistrates serving 146 districts, adding that the magistrates run operations covering 5 to 6 districts, a situation that is not favorable in the service.

He said that the current staffing covers only 47% of the established structure and that wananchi cannot get full judicial service when there is a shortage of manpower.

The Minister of Justice and Constitutional Affairs Hon. Ephraim Kamuntu commended President Museveni for recognizing the role of the judiciary in transforming Uganda into a modern state and the people of Uganda for exercising their democratic rights.

The Attorney General William Byaruhanga said that the electronic management of courts has made a big contribution in delivering justice in Uganda.

The President of Uganda Law Society Phiona Nabasa said that the 3,700 members of the Society congratulate him for winning during the recent elections. She called on him to appoint the Chairperson of Uganda Human Rights Commission.

Later, President Museveni flanked by Chief Justice Owiny Dollo, Speaker Rebecca Kadaga and other Justices officiated at the laying of the foundation stone for the construction of the Supreme Court and Court of Appeal Buildings in Kampala. The structures will cost UGX Shs 63 Billion, according to Uday Kiran, Contract coordinator of Seyani Brothers and Co. Ltd and Parbat Siyani construction Ltd. Joint Venture.