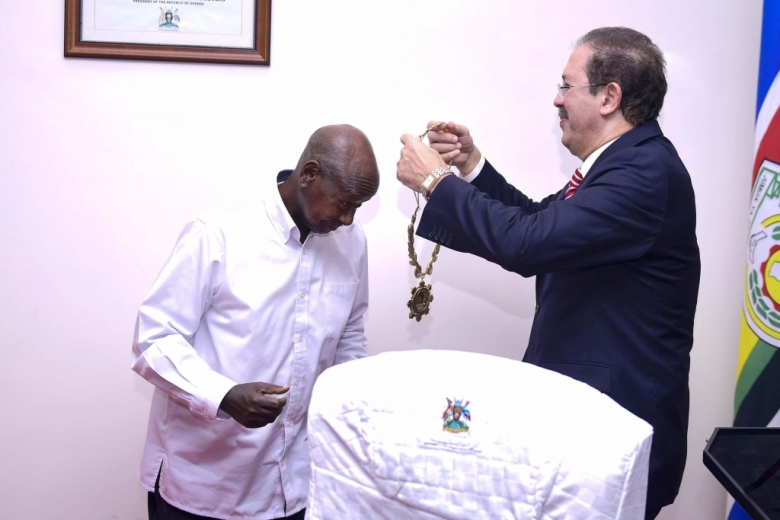 President Yoweri Museveni has received the Association of National Olympics Committees of Africa (ANOCA) order of merit award on the Africa continent, presented to him yesterday by the President of ANOCA, Mr. Mustapha Berraf at State House Entebbe.

“I am grateful for your recognition of our humble contribution to the revival of sports in Uganda. Our approach has been holistic. What is reviving sports and talent in Uganda is the recovery of the whole system and not just sports. We started with the army to guarantee peace and then worked with the private sector to revive the economy and the industrial sector. Because of this, we have been able to support modestly, social services, education and health. The population has grown and children live longer,” he said.

In the citation, the highest sports honor ANOCA award is given to Heads of State who have supported sports. ANOCA appreciated and recognized President Museveni for his unwavering Commitment and support towards the sports sector, recognized his visionary and transformational leadership Uganda has undergone in all sectors including sports manifested by the growing number of medals won regionally and internationally and creating a conducive environment atmosphere for sports to thrive.

The President said that because of the peace, there is a big enrollment in the education sector of up to 14 million Children in schools.

“It is these who are brining up sports. We are going to have a few more stadiums. If we focus, we have a lot of potential. I know sports is good for stamina, builds resilience of Character and good discipline,” he said.

Mr. Museveni noted that sports helped in building resilience of character that is a vital discipline that is needed in the daily life of every person.

“I used to be a footballer and also used to play cricket therefore I know that sports is very good for the society. It helps you get stamina and makes you push on even when you are tempted to give up,” he said.

President Museveni added that while sports was also a source of entertainment and money, it was also helpful in building an attitude of cooperation with other people and created nobility of character.

“If you don’t win in sports, you don’t get bitter, so it eliminates negative competition but appreciates the winner. This is also an important aspect to learn in life,” he said.

On some of the reasons why Africans are exceling in sports, the President noted that it was because of the high altitude that they trained on and the energy giving foods that they consumed.

President Museveni was happy to inform the executive committee that he was such a big fan of sports that even while in the bush, he would still follow the big sports activities happening in Africa and around the world.

He thanked the members of the sports committee for voluntarily supporting sports in Africa and for working hard to bring out the talent and potential they see in the young people.

The First Lady and Minister of Education and Sports, Janet Kataha Museveni thanked the Olympic committee for recognized President Museveni with the award and for honoring Uganda and Africa at large.

The President of ANOCA, Mr. Mustapha Berraf appreciated President for his support and contribution to the sports sector and wished him long life and happiness.

President of the Uganda Olympics Committee (UOC), Mr. William Blick, thanked President Museveni for the conducive environment he has created; saying it was steadily making Uganda emerge as one of the best sports nation in the world, as it so far has two world champions.

He also informed the President that Uganda would be hosting the 55th ANOCA ordinary session executive meeting and that he hoped that this would open up more opportunities for Uganda in the sports sector.