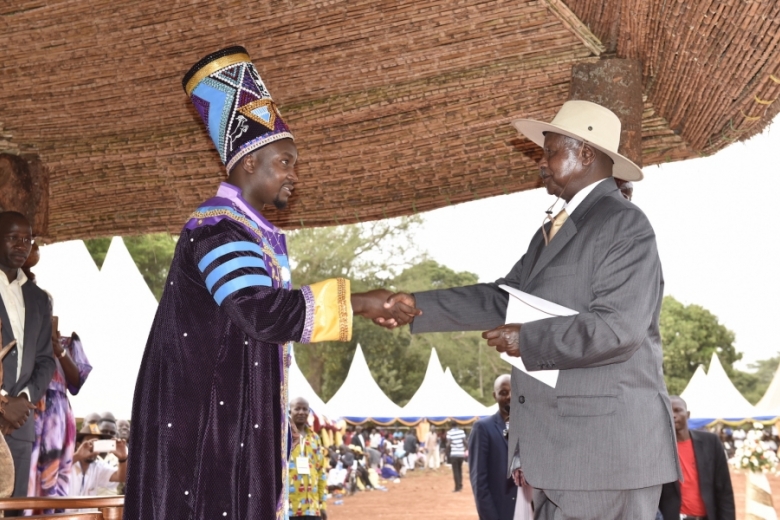 President Yoweri Museveni has defended the appointment of the Kyabazinga of Busoga, Wilberforce Nadiope the IV, as an Ambassador in the Office of the President stressing that the appointment is not unlawful, as it contravenes no law in the national constitution.

The President clarified that as a person who participated in the restoration of the cultural leadership in Uganda, he made the appointment of Kyabazinga as Ambassador, fully aware that it was both lawful and good for the Kyabazinga, the people of Busoga and of Uganda as a whole.

The President made the remarks yesterday while addressing thousands of people who turned up for the 78th Anniversary of the Kyabazinga Day. The occasion is a day when the 11 Chiefdoms of Busoga agreed to unite and form one Kingdom of Busoga under the single leadership of the Kyabazinga. The function took place yesterday at Namutumba district headquarters in Namutumba Town Council in Busoga Sub-Region.

President Museveni said that since he appointed the Kyabazinga an Ambassador, he has heard several voices, especially in the mass media, resenting and opposing the appointment. He said that there is no harm in that because those are exercising their freedom of speech ushered and guaranteed by the NRM government. He, however, advised Ugandans to always exercise their rights and freedoms from an informed source.

“I am the one who restored cultural leaders in Uganda and I know the law that governs them. I know where a cultural leader can contribute to Uganda without interfering with the law. I heard those who were unhappy that Royals don’t work but that is not the case. The Kyabazinga is a youthful leader who recently acquired useful education from abroad and can contribute to national development and I find no merit in denying him this opportunity,” he said.

The President added that history has it that some royals and cultural leaders have made a great contribution to the development and transformation of their nations and cited King Peter the Great of Russia who is the father of the transformation of Russia.

Mr. Museveni said that Peter the Great himself and 250 members of the royal family of Russia went and worked in Holland for years at the time when Eastern Europe was undeveloped while Western Europe was developed. He said that they acquired skills of making warships that Russia badly needed at the time and they became the foundation of the Russian defence backbone successfully defending Russia against Swedish and Turkish aggression. He, therefore, said that it was a myth to suggest that Royals are not supposed to work and make a contribution to their country.

The President said that he had instructed his advisor on Special Operations, Maj. Gen. Muhoozi Kainerugaba, to make a write up on the works of King Peter the Great, adding that the write up had already been handed to the Kyabazinga and asked him to have it published.

Mr. Museveni hailed the vision and wisdom of the Chiefs of Busoga that led in 1939 to the unity of the chiefdoms of Busoga into the leadership of the institution of Kyabazinga. He reminded them that unity is strength and strongly advised the Basoga to remain united for the development and transformation of the Kyabazingaship.

The President appealed to all Ugandans to work towards the prosperity of their families especially by focusing on how to raise their household income and get rid of household poverty. He said that in the case of Uganda, people should engage in modern commercial oriented agriculture. He, therefore, appealed to all leaders at all levels and the media as well, to sensitize the masses on the importance of profit oriented agriculture in the fight against household poverty.

Mr. Museveni further said that more opportunities to fight poverty and unemployment are in the sectors of industrialisation, the Services and Information and Communication Technology (ICT). He informed the people that the Movement Government is working on all development infrastructures to ensure the facilitation of those sectors with a view to reducing the cost of doing business and making them competitive.

Regarding the environment, the President appealed to all Ugandans who have encroached on the wetlands and swamps for either agriculture or settlement, to vacate them peacefully. He said that human interference with swamps, wetlands, forests, lakes and rivers is the cause of the unprecedented long and dry seasons that the country has had.

The Speaker of Parliament, Rt. Hon. Rebecca Kadaga, commended President Museveni and the Movement government for the support to the Kyabazinga and to Busoga overtime. She decried the drought that has badly hit the Busoga Sub-Region. She called for the launching of national tree planting campaign to be carried out in the Sub-Region because of the damage the drought has had on the region in particular and the whole country.

The Kyabazinga of Busoga, His Highness Wilberforce Nadiope the IV, reported that the Kyabazinga Day is very important in the life of the Basoga because it is the day when the forefathers of Busoga thought it wise to unite all the Chiefdoms of Busonga into a single leadership which unity, he said, has strengthened the Kingdom. He paid great tribute to his predecessors who led Busoga since its time of unity in 1939, for leading the Kingdom peacefully and for keeping it united. He said that this year’s celebrations were marked under the theme that emphasises unity, transparency, accountability and positive impact on the Basoga. He appealed to all the Basoga to live to those aspirations of the Kingdom’s leadership. ENDS