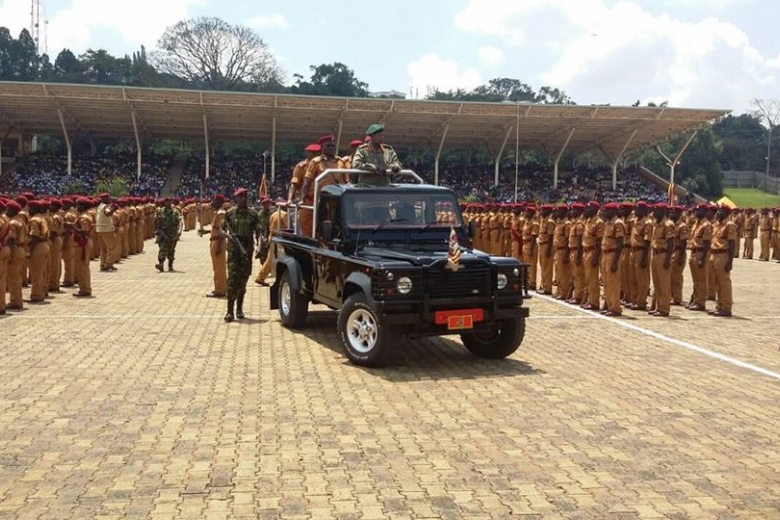 President Yoweri Museveni has praised the Uganda Prisons’ Service for exhibiting professionalism in their work especially in the area of making furniture. He said that he will soon issue a directive to all Government Departments, including State House, to buy furniture made by the Uganda Prisons Industries.

The President was this afternoon officiating at the pass-out ceremony of Prisons 1,548 warders and wardresses at a colorful function at Kololo ceremonial grounds in Kampala.

The graduands who successfully completed their 9-months training at the Prisons Academy and Training School in Luzira, were conducted through a rigorous course that comprised mainly correction and security in general. He President hailed the Prisons’ Service for providing prisoners with correctional and skills services. He pledged support to them in their effort.

The President also congratulated the institution for having weathered the bad regimes that killed innocent Ugandans extra-judicially and made prisons grounds their burial places. He thanked the Prisons Service for maintaining the nucleus of the 1,200 prisons staff NRM found in 1986 saying that the government was able to build on that nucleus to form a strong force of nearly 10,000 Prisons staff today. He encouraged the Prisons Services to recruit more staff following the NRM principles.

He further commended the institution for taking up his advice to grow cotton that is crucial in the textile industries, the making of animal feeds, cooking oil, gun powder as well as growing maize where seeds will be obtained for distribution to farmers in the country.

On the issue of accommodation, the President observed that the main problem with government institutions was lack of proper planning, but pledged to look into that matter.

He strongly advised the graduands to remain healthy and avoid situations that can lead them to contracting the HIV/AIDS scourge.

“Health is wealth. Please avoid alcohol and immorality. Don’t squander your life through indiscipline,” he counseled.

The Minister of State for Internal Affairs, Hon. Obiga Kania, thanked President Museveni for gracing the function for the first time since 1986 and urged him to continue supporting Prisons Services.

The Commissioner General of Prisons, Dr. Johnson Byabashaija, thanked the President for allowing the institution to increase the number of staff that will now enable the service to perform better. He too advised the graduands to be disciplined and exercise professionalism in their new career.

The Commandant of the School, Commissioner of Prisons John Bosco Tumwebaze, also encouraged the graduands to put into practice the knowledge and skills they acquired from their training.

Later, President Museveni awarded prizes to the best students. The overall best male student was Bwambale Alfred while Jennifer Kyakyo scooped a prize for being the best overall woman student. The best marks-man was Musa Otule and the best marksperson was Avuru Rose.

The ceremony was attended by visiting delegations from East Africa and senior government and security officials, among others. ENDS