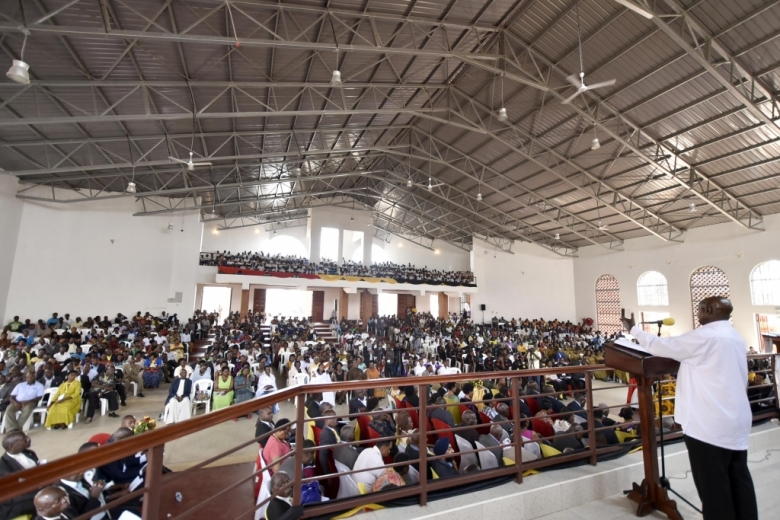 I was in Fort Portal, Kabarole District today to officiate at three key functions. The first was the official commissioning of St. Elizabeth Chapel at Kyebambe Girls Secondary School.

I congratulate the Kyebambe community on building the chapel because spirituality is the foundation of a decent life. The Bible says "Seek ye first the kingdom of God and the rest will be added unto you."

Use the chapel to pass the message of God to these children. It will help them. I can tell you, from personal testimony, that it will help them. To the students, develop positive attitudes and fear God. In all you do, remember God is seeing you.

The NRM introduced universal education. As a result, there is a significant number of educated but unemployed youths. I have been advising parents and other leaders to help us in the mission of re-skilling these young people and organizing them into groups.

Once in groups, we can support them to start income-generating activities, say acquiring a maize mill. We can give this to a group of ten in form of a soft loan or grant, which they can run and make money.

To the bishop, I say read Ecclesiastes 3:1-3. It says there is time for everything. I have invited the religious people so that we talk thoroughly. We should have a disciplined way of interacting. The country must be guided we cannot afford to make mistakes by anybody.

The government will contribute Shs300 million towards the chapel's completion.

The second activity in Fort Portal Town was the launch of Kalya Courts Hotel, owned by Mzee Isaya Kalya and his wife.

A retired Resident District Commissioner, Mzee Kalya also sent one of his children to join us in the Bush during the NRA Liberation Struggle. I commend his family for establishing a hotel and promoting the hospitality industry.

Tooro sub-region has got the Mountains of the Moon and a national park. There is a high tourism potential. The vital components in tourism are peace and nature. These ingredients are now in place.

Tooro sub-region will also benefit from the construction of the Kyenjojo–Kagadi–Hoima– Masindi road, that will unlock the tourism potential not just of Bunyoro but Tooro.

We shall also look at the issue of "unfair" Value Added Tax (VAT) raised by Mzee Kalya. We shall discuss it, especially its impact on upcountry businesses.

I will also support the women's group that is engaged in the production and export of a variety of crafts that include baskets for baked millet (ebiibo).

My final activity of the day was the ground-breaking ceremony for the construction of a Shs6 billion stadium at Buhinga on the outskirts of Fort Portal Town.

Similar stadia will be built in Bunyoro, Ankole and Kigezi, each to cost Shs6b. The stadia come with extras of a tennis court, hotel facility and other hospitality facilities.

The public should know that government runs its programmes on the principle of prioritization. For example, while construction of a stadium is cheaper than a road, the latter is more critical for our economic development.

For example, the Kamwenge road construction cost Shs400 billion. This would have built several stadia. Sports is a vital item especially to the youth but government has been handling other priorities first.

And before infrastructure was the question of insecurity, especially here in the Rwenzori region. People were worried about insecurity here but I assured you nobody could disturb our peace. We have a fully peaceful country now.

However, as we resolve the other infrastructure concerns, government will no doubt gradually invest more in sports facilities.