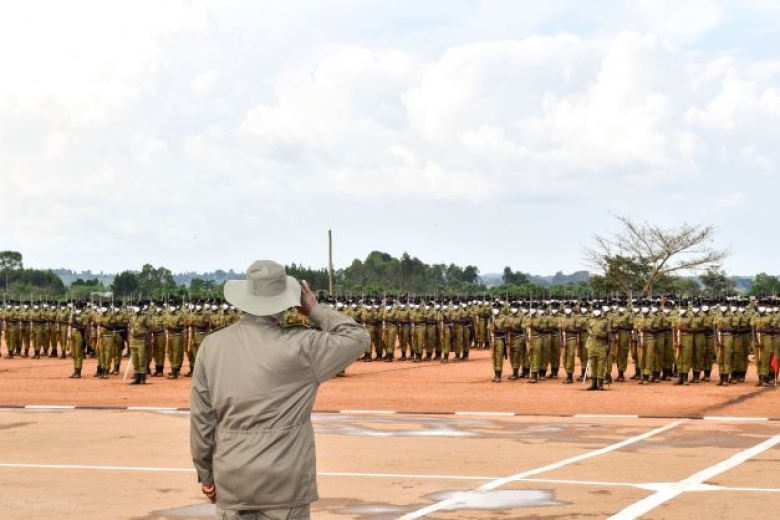 President Yoweri Kaguta Museveni who is also the Commander in Chief of Uganda’s Armed forces has passed out 5200 Probationer Police Constables (PPCs) at Kabalye Police Training School in Masindi.

The President was then taken to witness practical demonstrations by the trainees which including practical module of public order management, skills at arm, dry drills, shooting long range of 100 meters , shooting under effort among others.

A total of 5200 constables among whom 3783 are male and 1417 are female, the largest number in the history of the school have been undergoing a Probationer Police Constables course for 12 months and is the 22nd intake of police.

President Museveni congratulated the officers and assured them that their future is bright if they act right.

“You are lucky because you are entering a very important organ of the State, the Uganda Police Force. If you use this chance well, you will not regret. The future is bright don’t misuses this chance” he said.

The President counseled the young officers and urged them to avoid selfishness. “Some of us have been active in public affairs for a long time, about 50 years and have seen that when you are loyal to the people of Uganda and avoid selfishness you will be rewarded,” he said.

The President warned the trainees against making shortcuts in life through corruption and disobedience and prophesized their failure if they took that route.

He emphasized the four sectors of wealth creation and creators that they must protect as commercial farmers, manufacturers, service providers and ICT.

“All these countries which have developed have been developed by people who have created wealth. Like countries in Europe e.g Britain etc. what made it powerful are scientists and wealth creators,” he said.

The President assured the officers that their main role is to protect and support the wealth creators according to the laws of Uganda.

“You as police men and women need to know that as people create wealth, they should do it legally and your job is to protect and support the wealth creators according to the law by providing to them security,” he said.

Mr. Museveni said that if they did their role right and well, the country will grow very fast and the more wealth created the more money government gets to pay better emoluments to public servants.

“Uganda now has surplus of sugar, milk, maize soap etc. because of the correct strategy of the NRM government which gave protection and freedom to the wealth creators. Your job is to protect peace and wealth creation according to the law,” he said.

President Museveni revealed that Africa is not short of natural resources but is short of wealth creators.

“The police force must be ideologically clear because this is a historical mission for your country to move out of backwardness,” he said.

The Minister of Internal Affairs, Hon. Maj. Gen. Kahinda Otafiire advised the new officers to learn from their predecessors who have done well and shun any bad behaviors

“I would like to welcome the grandaunds into Uganda Police Force. I want to beseech you to learn from your predecessor. Learn from their excellent conduct and disregard their shortcomings. You have married the Police Force for better for worse, but you must always be for good,” he said.

Hon. Kahinda Otafiire told the new officers that their motto should be Uganda first, “Look after Uganda and Uganda will look after you,” Otafiire said.

The Inspector General of Police Martins Okoth Ochola said that this training should show the world how organized institutions can still carry on with their duties amidst a pandemic.

“Todays occasion gives us the opportunity to show the world how Uganda has managed to train over 5000 personnel amidst Covid-19 pandemic,” IGP Ochola said.

IGP Ochola said the police to population ratio has improved with now over 50,000 police officers in total (1-800) but added that they needed to do more to meet the international standards of 1 - 500.

IGP Ochola said that Police is planning to roll out the CCTV camera installation all over the country, tackle crime, Police welfare, and address the challenge of corruption and human rights violations.

“My imagination was, will it be possible? Will they survive in the next nine and so months amidst the Covid-19 scourge? I think I was only being idealistic and not materialistic. I thank the trainers for enforcing the Covid-19 SOPs because we have not had any death or Covid case” ACP Ziwedde said.

ACP Ziwedde encouraged other institutions of learning to emulate their standards of enforcing SOPs as Covid-19 has become a new normal.

He urged the police officers to embrace community policing because it is the best solution in curbing crime.

“I implore you to be exemplary and to remain disciplined while in the field. Always accept positive criticism that will enhance on what you learned and ignore negative criticism,” he said.