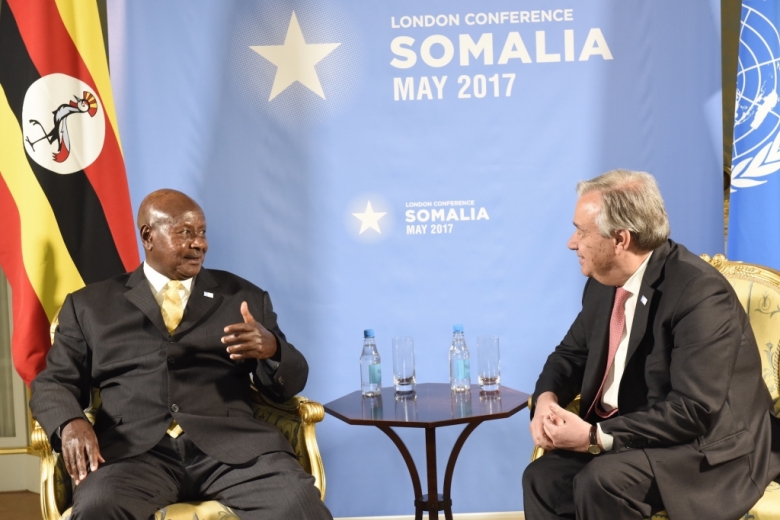 President Yoweri Museveni and the United Nations Secretary-General Antonio Guterres are stoking their efforts to give a face to the refugee crisis in Uganda and raise over US$2billion needed in emergency funds to handle the humanitarian crisis caused by the South Sudan conflict which is yet to end.

Uganda is now host to over 1.2 million refugees, of which almost 800,000 are South Sudanese who have fled the violence and famine with more than 2000 refugees coming in daily according to the United Nations.

“I have been allowed by President Salva Kiir to mediate the warring factions in South Sudan. I will use the IGAD monitoring report and work with the IGAD chairman, Ethiopias’ Prime Minister Hailemariam Desalgn to see that those who abuse the ceasefire are talked too,” the President said in a one to one meeting with Mr. Guterres at the sidelines of the International Conference on Somalia at Lancaster House in London.

The United Nations Secretary General, Antonio Guterres has confirmed his participation in the June 2017 Refugees Solidarity Conference to be held in Uganda and in which 30 other heads of State and stakeholders will attend. The two leaders were today involved in a flurry of activities meeting various stakeholders ahead of the conference.

In 2016, the Government and the United Nations each spent USD 150 million responding to the needs of refugees and the communities hosting them in 12 districts. However, the raising huge numbers are placing a huge strain on the already stressed ability to cater for the food, water, sanitation, health and education needs of the refugees and their host communities.

The ‘Refugee Solidarity’ conference was mooted in January during a meeting between President Museveni and Mr Guterres, at the sidelines of 28th African Union Summit in Addis Ababa, Ethiopia.

Uganda is currently ranked as the second-largest refugee-hosting country in the world after Turkey with a refugee population nearing to one million.