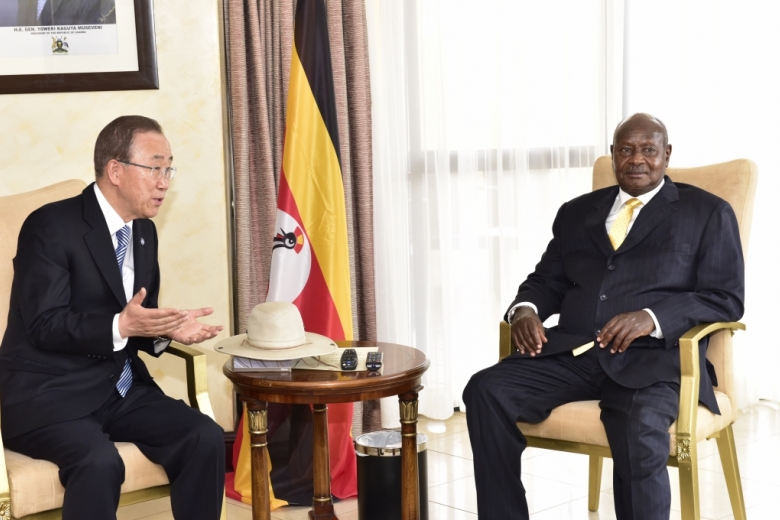 President Yoweri Museveni and United Nations Secretary General Ban Ki Moon are pushing for a strong message to the leaders of South Sudan involved in the conflict whom they said, despite receiving unconditional support regionally and internationally, have squandered the good will that was so generously given at the birth of the new nation.

President Yoweri Museveni has proposed three issues that need to be immediately handled including a regional protection force (in the transition period) for Vice President Riek Machar who does not trust SPLA for his protection, no new fighting in Juba and working towards elections and democracy as soon as possible.

“Deal with them carefully and work towards peace and elections. Votes will force them into alliances. Democracy will force them to work together. Now they know they are not accountable to the people,” he said.

The President’s recommendations follow UN Secretary Generals’ proposals to the United Nations Security Council to send a strong message to the warring factions in South Sudan including; Imposing an arms embargo on South Sudan, sanctions on the people responsible for the violence and fortifying and strengthening the United Nations mission in the country.

Ban Ki Moon said the violation of the ceasefire agreement by the two leaders in South Sudan makes the UN position very difficult and called on President Museveni as the guarantor of the peace process along side the AU and IGAD to send out a clear unified message to South Sudan.

President Yoweri Museveni however disagreed with the proposal to impose an arms embargo saying this would create a vacuum and plunge the newest nation in the world in further chaos like was the case in Somalia.

“I don’t agree with the proposal on the arms embargo. What is happening in South Sudan is sectarian politics where one partisan community is fighting the other. When you impose an embargo on South Sudan you destroy the local force on which you need to build a strong integrated army,” he said.

President Museveni wants to push for the two factions to work together through integration of forces instead of weakening them further.

“We can sew these factions together. Forces can be separated and used as building blocks. There must be a balance of all the three forces who must be dealt with carefully towards peace and democracy. If you maintain a situation of no democracy, you are disempowering the people. If they must have elections, they will be forced to find alliances and democracy will force them to work together. Without democracy, they will be forced to look for external forces,” he said.

President Museveni said with a well-grounded and facilitated timetable, there is a need for the of integration of forces and a fund for resettlement and rehabilitation of demobilized militias and soldiers.

The two leaders where meeting at the sidelines of the AU summit in Kigali at the Serena Kigali Hotel.