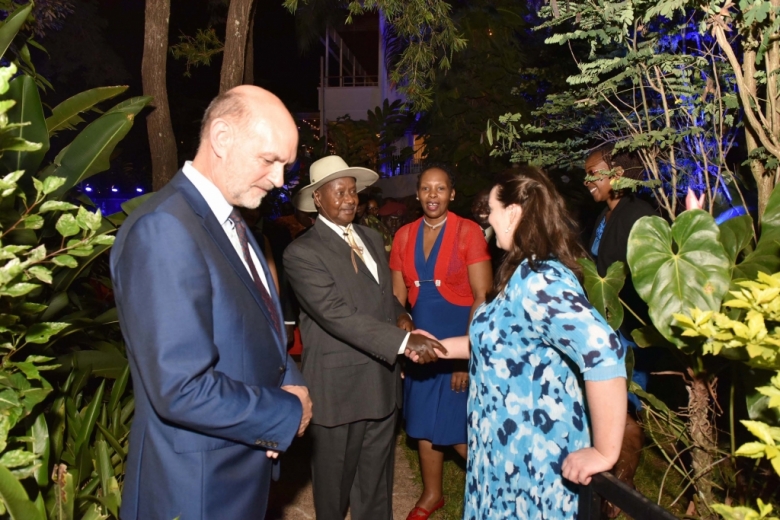 Last evening, President Yoweri Kaguta Museveni celebratred the official birthday of Her Majesty, Queen Elizabeth II, in the year of her Sapphire Jubilee and 65th anniversary of her reign this year at the British High Commissioner’s residence.

President Museveni, the Chief Guest at the celebrations said he has ardently followed the events of Her Majesty since her coronation ceremony, "I was a bit young, I remember; my mother showed me a picture of a young lady and said, this is the Queen of England."

President Museveni shared with the guests present, that he had to wait until the year 1996 to meet Her Majesty the Queen at Buckingham palace.

"The role of the Queen is very important. Our relationship with Kenya was not good at some point during Mzee Moi’s reign; we used the opportunity of the Common wealth which was sitting in Vancouver to bring peace between the two countries.

We were forced to talk because of her presence," President Museveni said.

He added, "I salute and thank God for her long life and reign as the Queen of England."

His Excellency credited England's good working relationship with Uganda and continuous support in the latter's economic recovery walk. Citing on how the British government lent a hand in the upgrade of the Owen falls dam from 60 mega watts to 180 mega watts; "that was the beginning of our economic recovery."

He went further, "trade by imports and exports between the two countries; and lastly, Tourism, which brings in easy money, unlike other sectors."

President Museveni concluded: "I want to extend my condolences to the British for the misfortunes that have been afflicting them of recent (the terror attacks and fire). We condemn in the strongest terms the terrorist attacks."