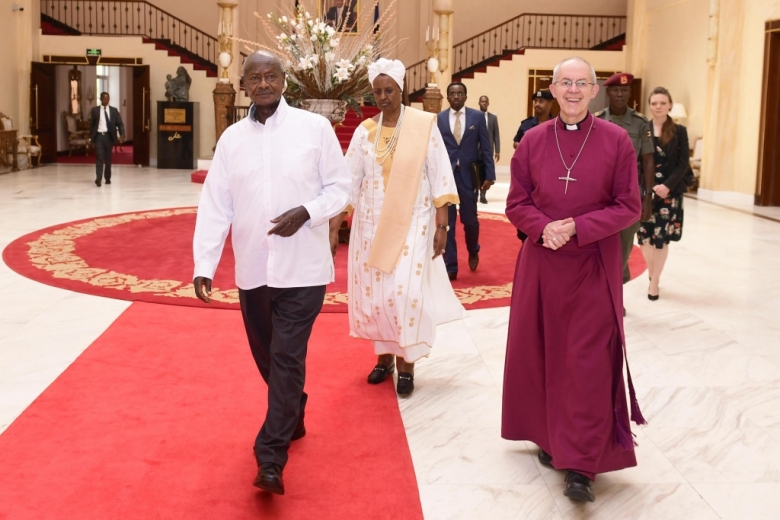 President Yoweri Museveni has welcomed to Uganda the Archbishop of Canterbury, the Most Rev. Justin Portal Welby, and Primate of all England as well as Head of the worldwide Anglican Communion.

“Thank you for accepting my invitation. There is the corona disease that has attacked us. On the world scene, a total of 80,000 people have been infected and 2,000 of these have died. I appeal to the health officers to prevent the disease. We shall continue checking at the airport,” said the President who was referring to the act of not shaking hands with his visitors because of the threat of the Corona virus.

The President used the occasion to reiterate that it is time to be open about the Corona disease, whose epicenter is in the Chinese City of Wuhan Capital City of Central China’s Hubei Province but has now been detected only in Egypt and Algeria on the African continent. The virus has caused deaths in Europe and in some of the Middle East but has only been detected in USA.

The visiting Head of the Anglican Community in the world is in Uganda to attend the consecration of the 9th Archbishop of the Church of Uganda, the Most. Rev. Samuel Stephen Kaziimba Mugalu that is slated to take place at St. Paul’s Cathedral, Namirembe in Kampala on Sunday 1st March 2020.

The President briefed the world Anglican Church Community leader on a number of challenges that Uganda is facing in hosting refugees from the region with particular reference to refugees from neighbouring South Sudan.

Archbishop Welby thanked President Museveni for inviting him to Uganda. “During my first visit in 1974, Uganda was characterized by gunshots but the situation today is the reverse. I see the miracle of civility and development in Uganda,” he said, noting that when we are faithful to God, we find the truth.

Archbishop Welby paid tribute to President Museveni for hosting refugees from South Sudan saying that the numbers were extreme. He also revealed that the Anglican Church would plant 100 million trees globally over the next five years as part of its contribution to environmental protection.

President Museveni and the First Lady Mrs. Janet Museveni, hosted Archbishop Welby and his delegation to a luncheon that was attended, among others, by Parliamentary Speaker, Rt. Hon. Rebecca Kadaga.