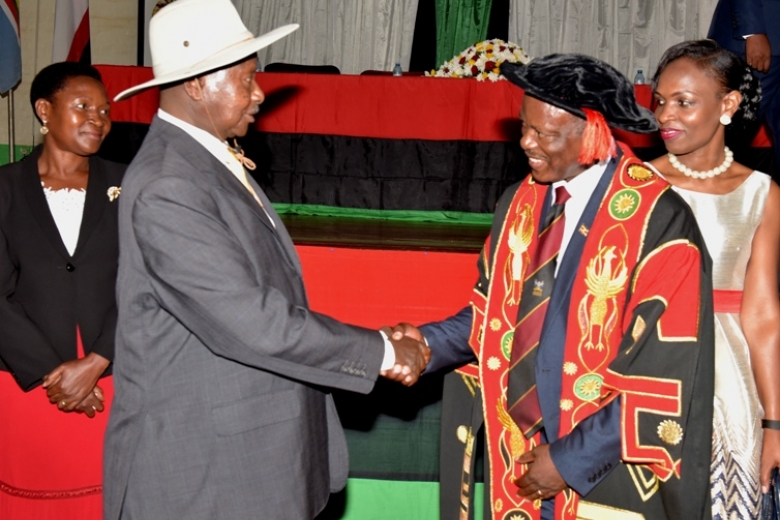 President Yoweri Museveni has this afternoon urged Makerere University leaders to teach market oriented courses that can enable students fit in the job arena and create wealth for themselves.

This was during the installation of the new Vice Chancellor of the university, Prof. Barnabas Nawangwe where the President chief guest.

"It is unfair for a parent to pay for a discipline that has no market. That is why you find somebody who did development studies at the University walking for years until the shoe sole is off," he said.

Mr. Museveni applauded the Science Department at Makerere University for having done its part of carrying out excellent research that has put the University on the globe. He, therefore, encouraged the Faculty of Social Sciences to borrow a leaf from the Faculty of Science.

"I was happy to launch the Presidential Initiative for Research. We are going to add more funding to it. The Social Sciences Department should have direction. There is need to harmonize the department because it has a lot of discrepancies in it," he remarked.

He reiterated that students must use their knowledge to see how best to help the country and her citizens to develop.

"Academic independence does not mean academic abstinence. You are just sitting there and not helping people. Education is not a mere waste of pass time. When I was here, I gave a thesis.  In my opinion, universities must be centres of ideology, technology and intellectuality. Academicians should not just talk about North and South poles. Engaging in knowledge that has no direction is to 'Kukongola' " said the President.

On the issue of salaries, Mr. Museveni said that this could be solved if the University reduced on the number of courses and majored in core courses that would make the lecturers to be paid well.

"Another problem that I get is when I try to pay the teachers and then they say that the sweepers’ salaries must be increased because she is sweeping next to the teacher," he noted.

Regarding University finances, the President advised the leaders to prioritize and build property on the University land so that the institution can develop. He castigated land grabbers who wanted to take the University land by claiming ownership to it. He informed them that their land titles would be canceled.

"I went to give a talk to Oxford University and when I was going through Oxford town, I was told that the University owned 50% of the property and that is how they got the money," he said.

Mr. Museveni congratulated the new Vice Chancellor Prof. Barnabas Nawangwe, upon his installation and also saluted Professor Ddumba for the great work he had done for the University.

In his acceptance speech, Professor Barnabas Nawangwe thanked President Museveni and the First Lady Janet Museveni, who is also Minister of Education and Sports, for supporting the education system in Uganda. He commended the entire Makerere University staff for putting the confidence in him to lead the institution.

He promised to strengthen the committee that fights against sexual harassment, evaluating and monitoring the teaching in the University and safeguarding academic credentials to mention but a few.

He asked President Museveni to intervene on the issue of land grabbers who wanted to steal the land of Makerere University.

Professor Ddumba Ssentamu, the outgoing Vice Chancellor, thanked the President for the stable support to him during his five-year tenure of serving Makerere University especially the Presidential Initiative on research at the University.

“I am happy to pass the mantle to Professor Barnabas Nawangwe who was part of my staff during my tenure. May God continue to guard you during your time in Makerere University,” said Professor Ddumba