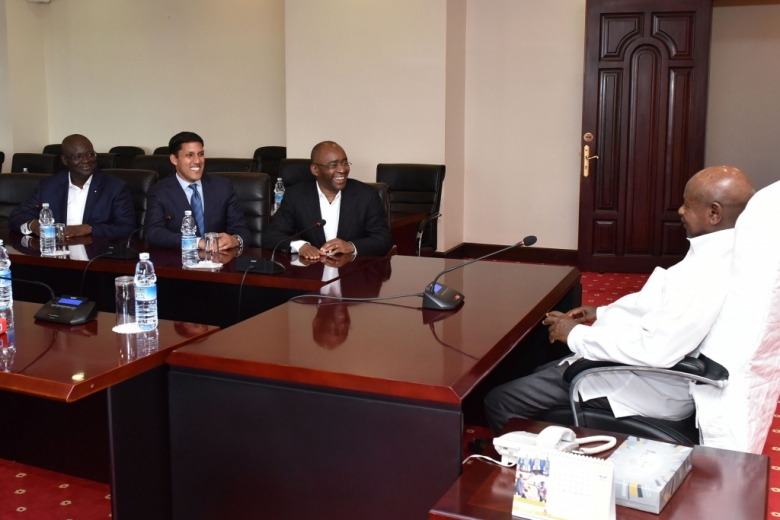 President Yoweri Museveni received and held a meeting at State House, Entebbe, with a delegation from the Rockefeller Foundation, led by Foundation’s President, Dr. Rajiv Shah.

The Foundation CEO has prioritized the East African Region since he took office on March 1st this year. The Rockefeller Foundation support to Uganda dates back to the 1930s with investments in health and education sectors.

President Museveni, who warmly welcomed Dr. Rajiv Shah and his delegation to Uganda, briefed his guests on the areas of support that Uganda could secure from the Rockefeller Foundation.

“Uganda Government is fighting against ticks in livestock. Our target is to have vaccines against tick-borne diseases developed. We shall be pleased if you could support us in this effort. If we can vaccinate, we shall have the capacity to protect the livestock without using acaricides,” he said.

Mr. Museveni also called on the Foundation to support Uganda in the development of solar powered pumps for the promotion of irrigation. He noted that if this is achieved, Uganda will have the opportunity to produce crops all the year round.

President Museveni further called on the Rockefeller Foundation to support Uganda in the Government research centers adding that the Government policy is to have a private sector led growth. He informed his guests that the promotion of the private sector led-growth could be achieved when there is availability of low cost infrastructure. He disclosed that the Movement Government is fully committed promoting the use of solar water pumps and rural lighting.

Rockefeller Foundation President, Dr. Rajiv Shah, said that his organization invests in finding solutions to various challenges particularly those affecting poor people. He said that the Foundation has been funding the improvement of African indigenous foods such as millet and sorghum.

Dr. Shah pledged to look closely at the development of livestock vaccines and assured President Museveni that Rockefeller Foundation is ready to work on affordable solar power supply in Uganda. He revealed that the Foundation is progressing with the smart power Indian plan to serve 1,000 villages in the Asian country’s State Uttar Pradesh. He also disclosed that plans were underway to launch smart power Africa starting with Uganda and Kenya.

Dr. Shah added that Rockefeller Foundation is also involved in promoting the green revolution in Africa. He said that the Foundation has supported Makerere University, Uganda’s oldest higher institution of learning in a diversity of ways. He revealed that his organization has assisted Uganda in the improvement of seeds.