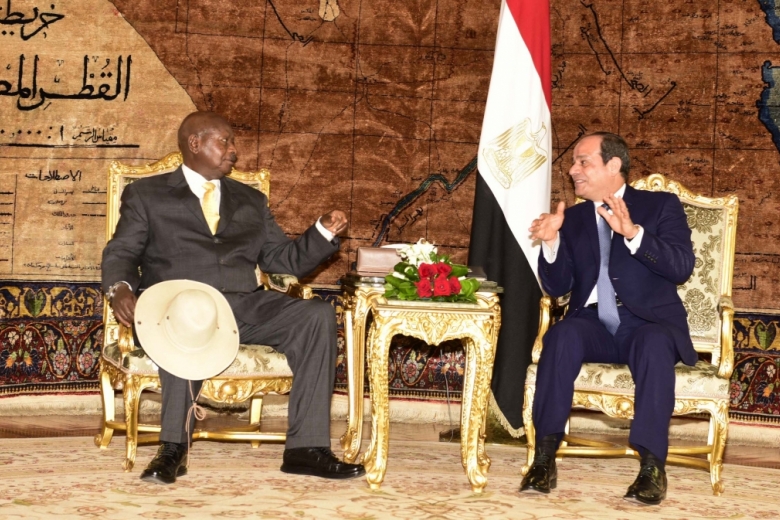 President Yoweri Museveni who began 2-day State Visit to Egypt yesterday, has congratulated his host, President Abdel Fattah El Sisi upon his resounding victory in the March 2018 Presidential elections that gave the Egyptian leader his 2nd term as President. Mr. Museveni described him as "a freedom fighter like his predecessor Abdel Nasser, who rescued Egypt from being taken over by extremists who would have caused problems for Egypt and Africa."

Mr. Museveni, who arrived in Cairo yesterday and held bilateral talks with his host at the Itahedaya Palace, said he was happy that Egypt is now under a progressive leadership with common interests of unity and development.

He said that he also discussed with his host the security situation in the region and Africa as a whole and where the two leaders were concerned that terrorism was causing a lot of violence and indiscriminate killing of their people.

President Museveni commended the Egyptian Agency for Cooperation for their operations in Uganda that included floods’ control, weeds in our lakes and on River Nile and the provision of solar energy in the country. He extended an invitation to President Abdel Fatteh el-Sisi to visit Uganda and become the first Egyptian President to tour the Source of River Nile.

A joint communiqué issued after the talks between the 2 Presidents says that the two countries’ respective Ministers of Foreign Affairs, Sam Kutesa and Sameh Shoukry, signed the communiqué while agreements for establishing four megawatt hydro-power plants in Uganda were signed between the countries’ respective Ministers of Energy and Mineral Development.

The Minister of Agriculture and Animal Industry and Fisheries, Ssempijja Vincent Bamulangaki and his Egyptian counterpart signed a Memorandum of Understanding (MoU) covering different fields of agricultural cooperation in the country.

President Abdel Fatteh El Sisi was in Uganda in December 2016 when he paid a one day State Visit at the invitation of President Museveni.