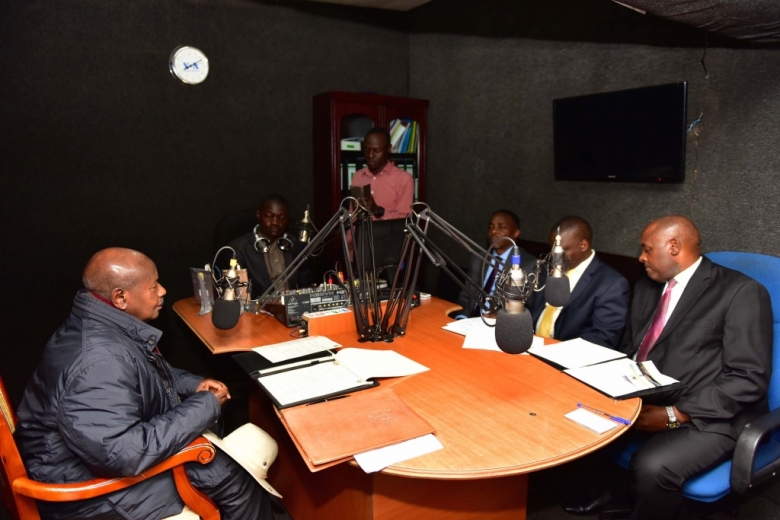 President Yoweri Museveni has strongly condemned politicians, especially from the opposition political parties and members of the press, for deliberately feeding Ugandans on lies, falsehoods and propagating the hate campaign among the people. He wondered why the relevant government Ministries and organs were not taking appropriate action against them.

The President made the remarks last evening at the Voice of Kigezi FM radio station in Kabale Municipality at the start of his nationwide tour that will see him address the nation on several matters of national importance with emphasis on land matters.

President Museveni, who was accompanied by the Prime Minister Dr. Ruhakana Rugunda, the Attorney General, Hon. William Byaruhanga and other leaders from Kigezi Region, said that the level of falsehood associated with the opposition politicians and the Ugandan media, has reached an unprecedented level that is forcing him to take it upon himself to come out to demystify and expose them so that Ugandans can know, for the good of their country, the kind of people they are.

Starting with the falsehoods associated with the proposed amendment to the land law, President Museveni wondered why anyone who is for the development of Uganda, would say that the amendment aims at grabbing land from Ugandans. He explained that it is the National Resistance Movement Government, through the 1995 Constitution, that legislated to give land to Ugandans by stating that “land belongs to the people” as opposed to the old law which said that “land belongs to the government”.

He, therefore, wondered how the same government could legislate to grab land away from the same people whose rights it always protects and defends.

“We are the only country in the region and may be in the world, who legislated to give land to the people; otherwise elsewhere, land belongs to government,” he explained.

President Museveni explained that although the existing law allows government to acquire land in public interest, some citizens either stubbornly or due to corruption and collusion with civil servants, have been rejecting government compensation, engaging government in protracted legal battles that result in delaying the implementation of crucial government development projects and programmes.

Citing several road and electricity projects that have stalled due land owners’ rejection of government compensation or seeking unfair compensation, the President said that the proposed amendment to the land law is meant to ease government acquisition of land for only the development of public infrastructure such as roads, the railway and electricity.

He added that the acquisition must be done after compensating the landowner. He said that government is even proposing several other avenues where a discontented land owner can reach out for an appeal in order to receive justice and fair compensation but at the same time ensuring that the public good goes on without losing time.

“The challenge that the government has is land owners who reject government compensation and run to court thereby making government projects stall. I even wonder what these liars mean by “government grabbing people’s land” and Ugandans must know these liars as their enemies and enemies of Uganda because they are against the development of the country,” the President stated.

“They are the same people who talk of unemployment amongst the youth but go on to frustrate government projects such as those in the energy and transport sectors that provide incentives for investment. They even frustrate investors directly as you are aware of the Amuru sugar project that has stalled for 6 years due to the same people,” he added.

“We need mass industrialisation to develop our country but these saboteurs continue to frustrate investors. I call upon all Ugandans to rise up against these people who are enemies of Uganda,” the President said.

“We even risk denting our country’s image internationally and being isolated because of the character of these people. We have to expose and shun them; otherwise the rest of the world will misunderstand us,” he noted

On the fight against household poverty, President Museveni called on the population to engage in modern agriculture that is commercial and profit oriented. He also called for cooperation with the Operation Wealth Creation Programme officials. He said that Government has embarked on the promotion and use of irrigation throughout the country focusing on availing solar powered irrigation pumps in order to mitigate the effects of the long drought spells that have hit the country.

He further called on the population not to destroy wetlands and swamps and also refrain from cultivating on riverbanks and lakeshores. He said that such activities contribute immensely greatly to climate change in the country. He revealed that government has a program to resettle a small portion of Ugandans who could have un-knowingly settled in swamps especially during the colonial era and revealed that government has so far secured 24 million dollars towards this direction.

President Museveni who is also the national Chairman of the National Resistance Movement also used the occasion to rally all NRM supporters to offer themselves and participate in the upcoming Local Council 1 elections slated for November 21st 2017 and to elect Movement candidates.

“Don’t allow those opposition hypocrites, liars and opportunist to take those leadership seats because if they can lie when they are few on the top, what damage would they cause if they take leadership positions at the village level,” he said