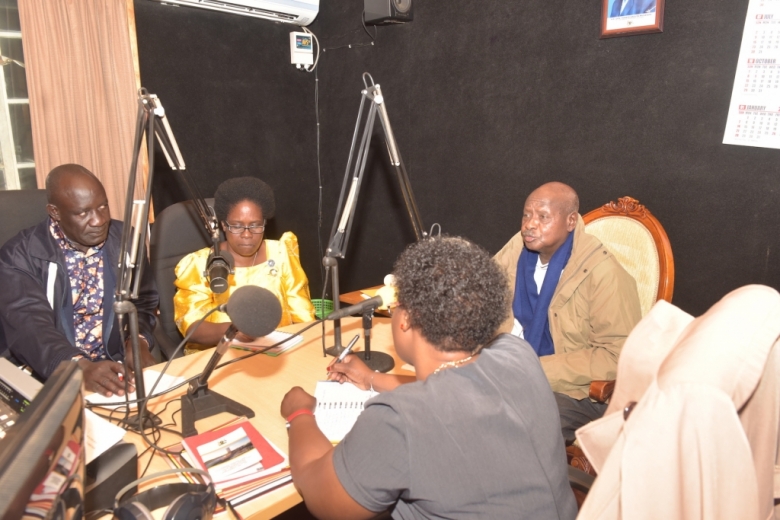 The President was featuring in a live radio talk show programme to sensitize the masses in the Teso Sub-Region in particular and Uganda in general on issues hinging on the proposed Land Amendment Bill. The programme aired last evening on Soroti Municipality-based Etop Radio station.

Quoting from the Bible text in the Gospel of Matthew, President Museveni castigated some members of the opposition who act as wolves in sheep skin and try to sabotage government work by telling lies that government wants to steal people’s land. He strongly warned them to stop using their tongues for evil purposes and lies.

“When you come here on radio and don’t tame your tongue, you are supporting evil,” he said.

Mr. Museveni explained to listeners in the Teso Sub-Region and Uganda in general that the Land Amendment Bill seeks to do away with the greedy people who are in the habit of imposing exorbitant and irrational amounts of money to be paid by the government as compensation. He added that such greed leads to the delay in the implementation of government development projects.

“They are working on the Mpigi – Kanoni – Sembabule road and they had to pass through my land taking 21-acres but I told them that I needed the road before they even decided on the compensation. After evaluation, they paid me Shs.69 million for my 21 acres; yet in Kamwenge, somebody demanded for Shs.1.2billion for a quarter an acre of his land. What do we do with such a person?” he wondered.

The President observed that asking for exorbitant amounts of money, as compensation for land was the same as saying that the person involved did not want roads to be constructed. Mr. Museveni urged NRM leaders to defend the poor and to see to it that government programs reach and help them.

“We introduced UPE because many families could not afford to pay school fees but many schools are still charging fees. My question is, what has changed? Are the parents now rich? Children will now be chased out of school. Why are NRM people allowing this to happen? Why isn’t the opposition talking about it?

Regarding cattle compensation, President Museveni said it would be done although the project had faced a challenge of verification where, yet again, people were telling lies in order to be compensated. He observed that it is easier to do re-stocking of cattle whether someone lost cows or not.

On the issue of veterans’ compensation, Mr. Museveni said that it has been prioritized for settlement adding that the exercise was easier to verify because it involved a smaller group than those involved in the cattle compensation programme.

Answering a caller who wondered why the Government is not utilizing fully the land some citizens had freely given to build and develop parishes, President Museveni said volunteered land that was not currently in use, should be put in the land bank to be utilized when need arises.