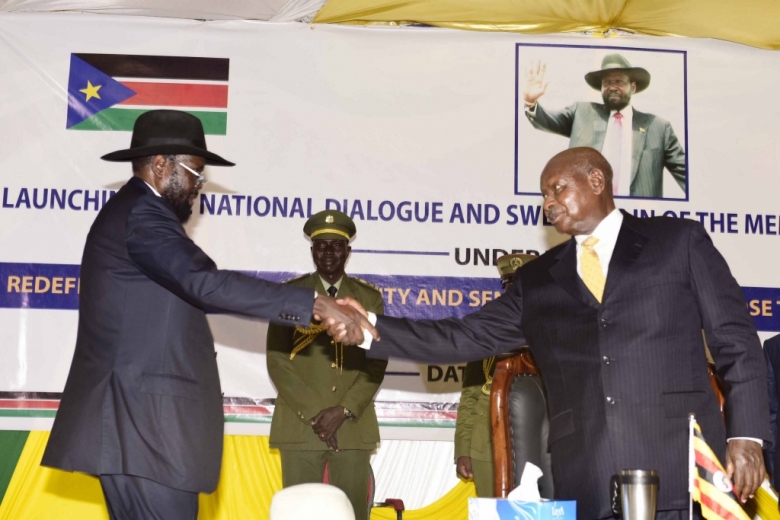 President Yoweri Museveni has urged the people of South Sudan to embrace unity for prosperity and development warning that the misuse of identity can paralyze and endanger their nation.

“There are three problems; misuse of identity. This can paralyze and endanger any nation. Why insist on identity at the expense of other people. The issue of identity broke up Sudan,” he said at the launch of South Sudan’s National dialogue and swearing in of the steering committee members.

The President arrived in the South Sudan Capital Juba direct from Dar es Salaam where he assumed the EAC chairmanship, to attend the ceremony at the invitation of President Salva Kiir.

The launch was held at the Freedom Hall in Juba under the theme: Redefining the basis of our unity and sense of common purpose through the national dialogue.

“Yes identity is important but it can be misused. Why are you not concerned about prosperity, about common interests? Emphasizing identity and forgetting common interests is very dangerous. Our other disadvantage is backwardness in technology and science,” he said.

The President said he came to Juba to lend his support to the effort to promote dialogue for peace. “I salute H.E Salva Kiir for inviting all stakeholders to discuss the problems that afflict the people of South Sudan,” he said.

A 94-member steering committee for national dialogue was sworn in to start the work of bringing harmony and peace to the people of South Sudan. The committee co-chaired by H.E Molana Abel Alier and H.E Angelo Beda Bangboru comprises of distinguished members of the country including religious leaders and professionals as well as politicians. Among them is Mrs. Rebecca de Mabior widow to fallen leader of South Sudan H.E Garang De Mabior.

The National dialogue initiated by President Kiir is both a forum and process through which the people South Sudan shall gather to redefine the basis of their unity as it relates to nationhood, redefine citizenship and belonging, as well as restructure the state for national inclusion.

President Museveni who was chief guest commended President Salva Kiir for initiating the national dialogue and called on the people of South Sudan to support SPLM.

“SPLM is a strong movement and has respect of the people of South Sudan that is why it won by over 99 percent. Where did you get all that support...the Dinkas, Nuer and people from Equatorial province. How can you let them down? This is very good political capital which you cannot squander, you should revive SPLM and weed out all those subversive ideas, ” he said.

The President called on political leaders to avoid thinking of administrative/government positions only but revitalize the private sector, which will in turn create jobs and pay taxes leading to national development.

On party organization he called for transparency and dialogue where meetings should be convened to raise issues in the right forum instead of using force. He castigated the use of force saying that it should be a last resort and specifically targeted.

“Force is like a surgeon who after identifying a problem, cuts you up to fix it after other means have failed. But even then it’s targeted to remove only the disease. But when this is repeated, it becomes butchery not surgery,” he said. He warned against the use of violence in every situation.

The President also warned against tolerating impunity in cases of killings, rape and defilement especially by armed forces calling for strict discipline to gain the confidence of the masses.

In his speech, President Salva Kiir congratulated the committee and the secretariat for accepting the national duty and said the people of South Sudan look up to you to help deliver peace and reconciliation among them,” he said.

President Kiir also called upon national leaders to embrace the spirit of national unity and join the national dialogue so as to end the violence in the country.

He also declared a unilateral ceasefire to create an environment for an inclusive dialogue and to facilitate the movement of humanitarian aid to famine stricken areas.

“Declaring national dialogue was based on our belief that solutions to the internal conflict in South Sudan are within our reach and that we are ultimately responsible for resolving our internal matters. We have witnessed that imposed solutions can divide and sow seeds of hate and fear among us. It is imperative that we, as south Sudanese, take responsibility for brining lasting peace to our beloved nation,” he said.

The national dialogue shall undergo three different stages; the first phase shall largely deal with grass root consultations to map out grievances that are unique to each community. The second step will be to convene regional peace conferences and the third and final stage will be to convene national conference which will tackle the remaining issues that will not have been addressed at the subnational level as well as adoption of resolutions made.

President Kiir said that the Presidency remains committed to provide guidance and leadership through moral, political and financial support to the committee.

“As your government, we are taking charge of our country and we are taking full responsibility for ending the on-going crises, including the war, famine and economic challenges we are facing,” he said.