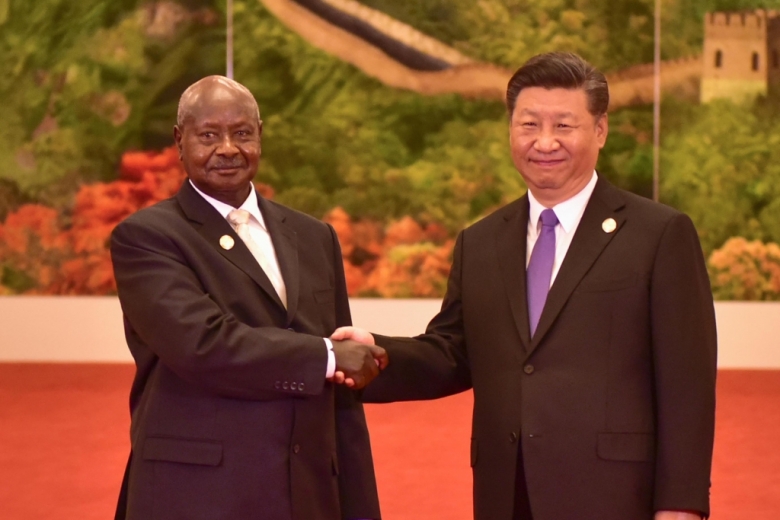 President Xi Jinping of China has reaffirmed his country’s commitment to follow the path of win-win partnership cooperation with African countries adding that Africa’s development   has great potential and the continent is full of hope.

The Chinese leader was  opening the 2018 Beijing Summit of the Forum on China-Africa Cooperation (FOCAC) at the Great Hall of People in Beijing.

President Yoweri Museveni was among several African Heads of State and Government who attended the opening ceremony of the summit.

The 2-day meeting that is running under the theme, ‘China and Africa, toward an even stronger community with a shared future through win-win cooperation’ has attracted several African leaders who include among others the current chairperson of the African Union President Paul Kagame of Rwanda.

While welcoming his guests to Beijing-China, President Xi-Jing ping pointed out that his country has fulfilled its pledges made during the 2nd FOCAC summit held in 2015 in Johannesburg South Africa.

‘China has implemented plans adopted in the 2015 summit in Johannesburg railways, airports, peace, security, culture and science. The US$ 60 billion offered has been delivered or arranged,’ he noted.

He said that those plans have brought benefits to the people of China and Africa and have elevated the cooperation to greater heights.

President Xi-Jinping announced his country’s commitment to implement the 8 major initiatives with African countries in the next 3 years covering among others areas of Industrial promotion, infrastructure connectivity, trade facilitation and green development in-order to mitigate effects of climate change.

He added that China values sincerity and trust in pursuit of partnership cooperation and has neither any attachments to the strength in the continent nor seek any gains while cooperating with Africa.

The Chinese leader pointed out that his country will seek to have both sides leverage each other’s strengths, not to interfere in African Affairs and only believes in giving more and taking less while supporting development programs on the continent.

He announced that China would exempt some African nations from outstanding debts in the form of free Chinese government loans due by the end of 2018.

‘Anyone who isolates himself like an Island has no future,’ he said.

He further disclosed that China will also get involved in governance and stay committed to the vision of consultation, cooperation and benefit for all in the global governance adding that his country reaffirms it’s commitment to peace, security, stability and development.

President Xi added that his country will support Africa in achieving food security by 2030 through agricultural modernization as well as provide food relief to countries faced with famine.

President Xi further announced that china will support the youth from Africa by offering them scholarships, training high calibre young people from the continent and launching Africa innovation centre and that of environment.

He assured African Leaders that Chinese Art and cultural centres will also be established in Africa.

The Chinese President announced another financial support of US $ 60 billion to the African continent for various sectors emphasizing the need to help the youth whom he described as the future of a blossoming relationship between China and Africa.

‘I trust that the relationship between China and Africa will be passed on from generation to generation. We must build a community with a shared future,’ he stressed.

The President of South Africa Cyril Ramaphosa who was also the co-chairperson of the session said FOCAC refutes the misconception by some quarters that it is a new form of colonialism in Africa pointing out that the Forum is on the contrary beneficial to the people of China and Africa.

‘It is a vision of an integrated prosperous and peaceful Africa, we welcome the announcement by FOCAC initiatives that will have positive and everlasting impact to the people of Africa,’ he observed.

The President of Rwanda and the current AU chairman Paul Kagame noted that FOCAC has grown into an engine of meaningful cooperation between Africa and China. He saluted President Xi-Jinping for his personal engagement in these  efforts.

‘We now want to scale up and strengthen the Forum to maximise mutual benefits,’ the Rwandan leader said.

The Secretary General of the United Nations Antonio Gutterres praised China for pursuing the path that will immensely contribute to the well being of human kind in the world.