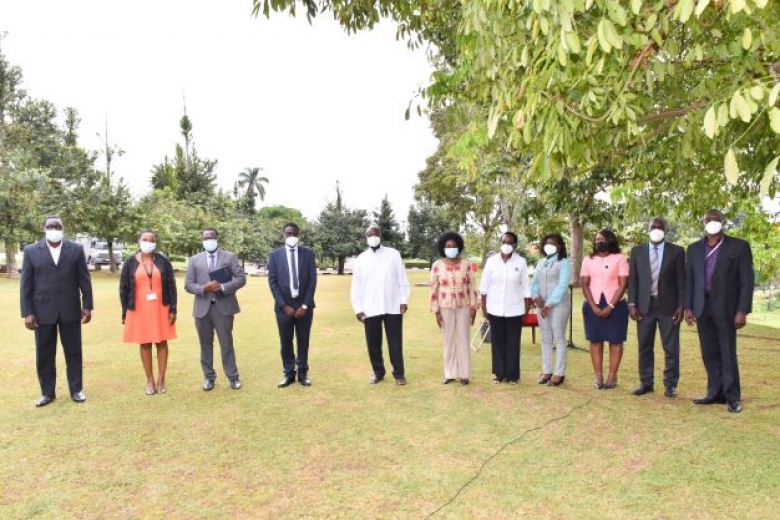 President Yoweri Museveni has held a consultative meeting with a team of scientists from the Ministry of Science, Technology and Innovation, World Health Organization (WHO) and herbalists at State House, Entebbe.

In the meeting, the President discussed with the team the significance of herbal medicine.

"I know herbal medicine. Some of them are incomparable. I was treated with local medicine up to eight years old but I'm now 77 years old. There is a plant called “Ekimara”. Since time immemorial, the Banyankole use it to treat tapeworms among others. The African people kept this knowledge a secret with their families,” he said.

The President called upon the doctors to work closely with the innovators of herbal medicine through doing clinical trials in the presence of the formulae founders (herbalists) in order to rule out mistrust and thereafter identify the important elements which cure a given illness.

“Once trials are done and the herb is considered to be good then let it be captured and put on record thus earning intellectual property protection.  Thereafter, let it be used here and internationally,” H.E Museveni said.

The president further asked the scientists to look into the education curriculum and see how students can also benefit from their research.

In her response, the Minister of Science, Technology and Innovation, Hon. Dr.Monica Musenero, thanked the President for his relentless efforts in developing a science-led economy, and specifically championing the development of indigenous herbal medicines.

Dr. Musenero vowed to adhere to the President's guidance and also informed him about the need to acquire a laboratory machine which will be used for trials. The President accepted the proposal.

Others were Dr. Moses Ocan from the Department of Pharmacists at Makerere University College of Health Science, Dr. Grace Nambatya, Director of Natural Chemotherapeutics Research Institute (NCRI), Dr. Robert Balikuddembe, a researcher at NCRI, Dr. Jackie Kyosiimire, a scientist working at the Uganda Virus Research Institute (UVRI), Hajji Jamil Mukwaya Lutakome, the Chairman of the Herbalists’ Association at the National Drug Authority (NDA) board and Dr. Richard Komakech, a researcher with NCRI.