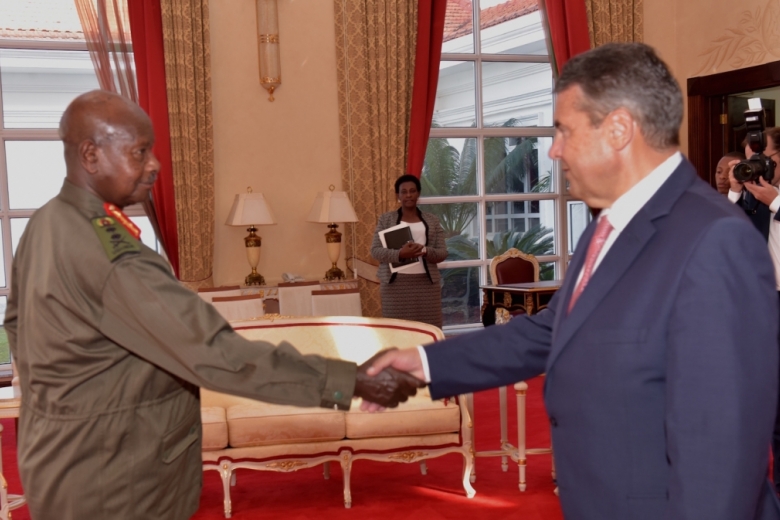 The Minister, who called on the President, was speaking during a meeting with him yesterday at State House, Entebbe. Mr. Signar said that although Germany has hosted many refugees, mainly from the Middle East, what Uganda is doing especially for the South Sudanese refugees, is very inspiring and should be supported by the international community because in the long run, Uganda might not be able to sustain the refugee influx.

“Germany has many refugees but that is different from what a poor country like Uganda is doing. The international community should support Uganda because it stands out as an example and deserves support and recognition,” he said.

“They talk about South Sudanese in Uganda but all these people are the same. Those are just colonial borders,” he said.

Mr. Museveni called upon the international community to address the causes of refugees such as wars and civil strife and the challenges faced by refugees in the communities where they settle such as provision of education, health services, water and energy.

He explained that there is need to have more schools as the schools built by government are overwhelmed by the unplanned for populations. He added that if the refugees use the time in Uganda to study and get skills, they could be useful once they go back to their countries.

He also called upon the international community to develop infrastructure in areas where refugees have settled so that they do not cut down trees for fuel and cooking to ensure that they do not damage the environment.

The President also briefed the visiting German Minister about the situation in South Sudan and his efforts to unite the various factions of the Sudan People’s Liberation Movement (SPLM) to which the Minister called upon the international community to support Uganda’s efforts to cause peace in South Sudan.

“Uganda has committed itself to the peace process in South Sudan, it is our role as the international community to support them as, in the long run, it will not be able to handle the refugee influx,” he said.

The Minister of Foreign Affairs, Mr. Sam Kuteesa and that of Disaster Preparedness and Refugees, Mr. Musa Ecweru, attended the meeting