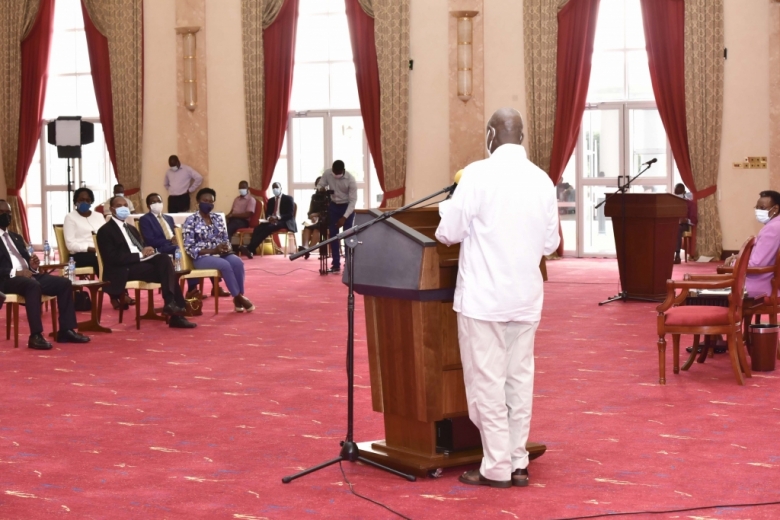 President Yoweri Kaguta Museveni has presided over the official virtual launch of the Young Africa Works initiative an initiative of the MasterCard Foundation. The MasterCard Foundation is an international non-governmental organization established by MasterCard in 2006. The foundation develops programs primarily in education, employment and agriculture fields. The Young Africa Works is a 10 year strategy by the MasterCard Foundation aiming to enable 3 million young Ugandans to access dignified opportunities in agriculture, tourism and hospitality, and construction and housing. At the virtual launch held at State House Entebbe and that was also attended and addressed by the First lady and Minister of Education and Sports Hon. Janet Museveni, President Museveni thanked the leadership of MasterCard Foundation for the initiative of the Young Africa Works strategy. “I commend MasterCard Foundation for your efforts towards youth empowerment and transformation in Africa, over the last decade. I am glad to note that your focus, in the coming decade, is on uplifting young people through expanding employment opportunities,” he said. The Young Africa Works strategy, the President said, is in line with the work that the NRM Government is doing to achieve the goal of a healthy, educated and prosperous population. “The leadership of the NRM is always committed to correct diagnosis of the problems of society and consequently offering the most appropriate cure to them. Once you are able to correctly identify the problem, it is easier to arrive at a trusted solution and to mobilize people to follow you. This is why visionary leadership is needed to collectively address the bottlenecks which have stagnated development in Africa,” he said. The President said that since 1986, when the NRM came to power, the government has followed the principle of prioritization in addressing the major setbacks to socio-economic development. He said that the liberation forces prioritized the peace and stability of Uganda by defeating all the negative forces that posed a danger to the lives of Ugandans and their property. The next focus, the President said, was on human resource development through improving health care services and expanding access to education for all people. “On account of the mass immunization campaigns, we were able to prevent our young people from dying at infancy from the killer diseases like Polio, Measles etc. The introduction of Universal Primary Education (UPE) and eventually Universal Secondary Education (USE) increased school enrolments at different levels of the educational ladder. This explains why the literacy rate in Uganda has grown from 43% in 1986 to 75% in 2020,” he said. Mr. Museveni said that significant strides have also been made in the area of infrastructure development. “The tarmac road network in the Country now stretches from border to border. We are now generating enough electricity; not only for domestic consumption but most importantly to support industrialization,” he said. The President said that since government has made remarkable progress in creating the necessary conditions that support investment, youth unemployment would be easier to address. “It is a challenge that is already half solved because the foundation for socio-economic transformation has been laid. Government welcomes the efforts of MasterCard Foundation as an important partner in skilling the youth and creation of jobs and wealth,” Museveni said. The First Lady and Minister of Education and Sports, Hon Janet Kataha Museveni congratulated MasterCard Foundation upon this important new milestone not only for Uganda but also for the whole of the African Continent. “I believe we can safely say that MasterCard Foundation is a faithful friend of Uganda because in the last decade alone they have provided quality education opportunities to over six thousand (6000) young people in Uganda,” she said These young people the Minister said, received tuition and accommodation fees support as well as mentorship among others. The First Lady confirmed that efforts of friends like the MasterCard Foundation complement government efforts of increasing access to higher education through the four thousand (4,000) scholarships and over a thousand (1,000) Student loans provided to eligible fresh undergraduates annually. “I am also aware that MasterCard Foundation is redesigning the MasterCard Foundation Scholars Program and it is my prayer that Uganda will once again benefit from this phase,” the First Lady said. The Minister revealed that 60% of MasterCard Foundation scholars that completed University studies in Uganda went on to become employed; including self-employment. As a ministry, Hon. Janet said they are discussing and making preparations for another exciting program for the young people tittled ‘The Get to Work” (GTW) Program, introduced by Dr Lawrence Muganga, a young Ugandan Professor. The Minister of state for Investment Hon. Evelyn Anite revealed that over 300 people were following the launch via zoom and live broadcast, said that this MasterCard Foundation’s initiative is in line with the four NRM principles of Patriotism, Pan-Africanis, Social economic transformation and democracy. The Chief Executive Officer of MasterCard Foundation Miss Reeta Roy who commended the President for the efforts he has put in fighting Covid-19, said that they have already forged a number of important partnerships to move this strategy forward including with the Private Sector Foundation, Innovation Village, Guide Leisure farm and Equity Bank. “Even as we do, be assured that we remain committed to supporting Uganda though our MasterCard Foundation Covid-19 Recovery and resilience programme as you respond to the Pandemic, recover economically and build for the future” She said. The Chairman of Private Sector Foundation Mr. Patrick Bitature said that the decisions made today will shape and define the future of tomorrow. He called upon young people to engage in enterprises that will transform their lives. “MasterCard is here to change lives and supplement the efforts of Government” Bitature said. Uganda was the first African Country where MasterCard Foundation launched its operations in 2008. They have invested over $282m in expanding access to finance, education and skills training.