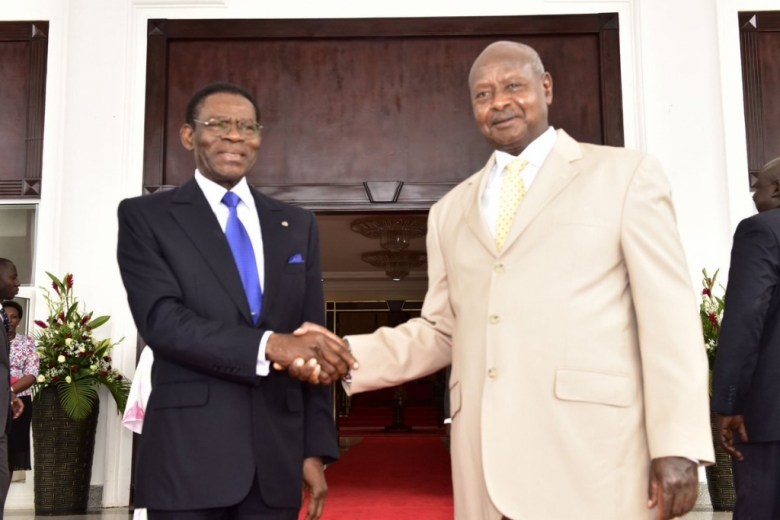 President Yoweri Museveni and his counterpart, President Teodoro Obiang Nguema Mbasogo of the Republic of Equatorial Guinea have directed their respective Ministers to ensure speedy implementation of exiting frameworks and work towards concluding those of cooperation in Energy and Oil sectors, Defence and Security, trade, industrialization, agriculture and transport.

President Teodoro Obiang Nguema Mbasogo is in Uganda for a one day working visit at the invitation of President Yoweri Museveni. The return visit follows one that President Museveni made to Equatorial Guinea in August last year.

The two leaders had earlier in August signed MoUs on oil and gas co-operation as well as trade and culture among others. The protocol also laid the ground for the establishment of a permanent joint commission for co-operation between Uganda and Equatorial Guinea.

President Obiang Nguema Mbasogo was accompanied by the Minister in charge of Presidential Missions Hon. Alejandro Evuno Owono Asangano, the Minister Delegate for External Security H.E Juan Antonio Bibang Nehuchuma and the Vice Minister for ceremonies and other senior officials.

The Uganda delegation included Hon. Irene Muloni the Minister for Energy and Mineral Development and other senior government officers.

The two leaders held tete – a- tete talks and thereafter held official talks with delegations from both governments at State House in Entebbe. The talks centered on a wide range of bilateral, regional and international issues of common interest.