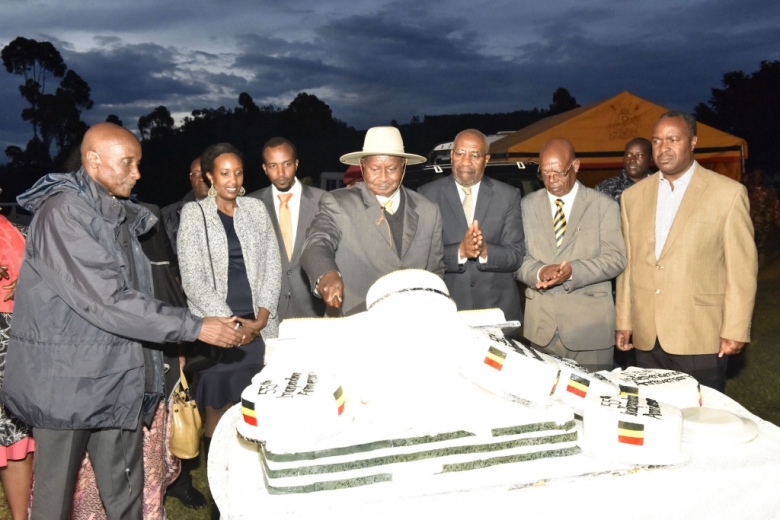 President Yoweri Museveni has thanked the Bafumbira in Kisoro district and people of Kigezi Sub-Region as a whole, for supporting the National Resistance Movement during the bush war period and after taking over government.

The President was speaking at a thanksgiving ceremony organized by the Bafumbira and Kigezi community to celebrate his achievements and those of the late John Kalekyezi, father of the Inspector General of Police, Gen Kale Kayihura, held at Isaaza Grounds  in Kisoro Municipality in South Western Uganda.

Kalekyezi was a great Ugandan Pan-Africanist who supported Africa's anti-colonial movements. He is father of our Inspector General of Police, Kale Kayihura.

I am glad he left a great legacy and the community is setting up a science institute in his memory. I also thank Gen Kayihura for keeping his father's legacy alive and celebrating him.

I thank the Bafumbira and Banyakigezi for supporting the NRM while it was fighting and even after it took power.

The NRM government has massively changed this area. Kisoro now has electricity and piped water. All roads to key border points here have been tarmacked; Mirama Hills, Bunagana, Katuna and Kyanika.

The only major road that needs tarmacking is that to Bwindi Impenetrable Park. We shall fix it once we get funds and continue supporting tourism.

The citizens, however, should follow our four-acre model to fight poverty. Use one acre for coffee or tea, another for apples since its cold here, the third for food crops and fourth for dairy animals or poultry.

I also urge families to desist from fragmenting their land. Own land jointly and only share the proceeds. Do not sub-divide your land.

Government will continue supporting factories and investors in this area to create employment, like we did with Garuga's tea factory.

The President noted that because of their support to NRM, the government has been able to create massive change in their area. He said that in the past, Kisoro lacked electricity and piped water but these have all been addressed.

“We had a problem of electricity but that got solved when we got power from Rwanda. All major roads from Kampala to the international border points have been tarmacked: from Kampala to Mirama hills; to Bunagana, to Katuna and to Kyanika. The only debt I have is to construct a tarmacked road up to Bwindi National Park,” he said.

President Museveni said that although government has caused infrastructure development in the region, there is need for the people to work hard and fight household poverty. He called upon the people of Kisoro district to stop the practice of parceling up land into smaller portions saying that backward practice is a threat to efficient production due to the fact that continuous subdivision of farms may be hard to economically manage.

“If you follow our plan of intensive agriculture, a four-acre piece of land can be used for commercial agriculture and this can greatly improve wealth. In one acre, you can grow coffee or tea; fruits in the 2nd acre, the 3rd acre food crops and then the 4th rear cattle, piggery or poultry,” he said.

The President said that government would support investors in the area to create employment opportunities for the people. He added that government has in the past assisted Mr. James Garuga with his tea factory and will support other investors with factories to export Irish potatoes and add value to the wolfram factory that is set to be built in the district.

Mr. Museveni commended the Inspector General of Police, Gen Kale Kayihura for commitment to his work.

Prime Minister Dr. Ruhakana Rugunda, congratulated President Museveni and NRM for scoring massive victory in the last elections and also for using the victories to consolidate peace as well as ensuring the transformation of the country.

Gen. Kayihura thanked President Museveni for honoring his late father, John Kalekyezi, at the Pan Africanist Square on 6th October 2010 during the commemoration of 50 years since his death and in October 2012 when the President paid his respects at his burial place in Gisoro, Nyakabande.

He reported that the thanksgiving ceremony of yesterday was not about just honoring heroes and immortalizing the great work they did when they were alive, but a chance to inspire others and provide progressive direction and spiritual energy to the young people and help to shape the future of the present and future generations.