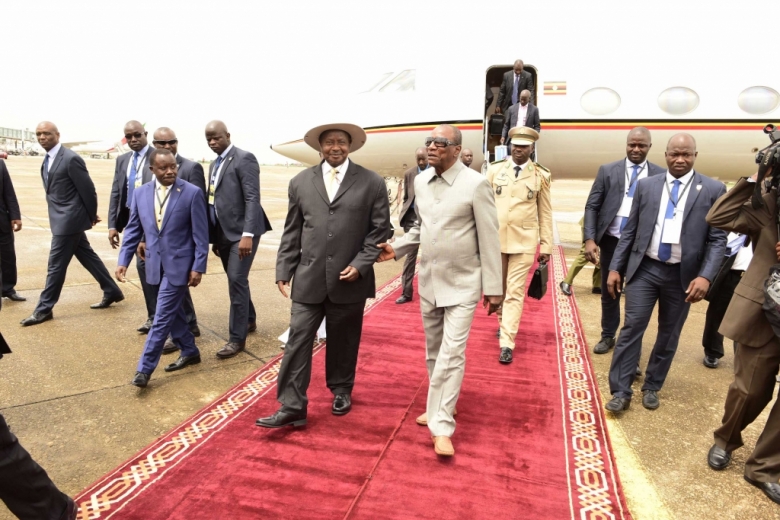 President Yoweri Museveni is in the Guinean Capital Conakry for a two-day state visit at the invitation of President Alpha Conde.

On arrival at the Conakry International Airport, H.E Alpha Conde received the President to a 21-gun salute and a guard of honour mounted by officers and men of the Guinea armed forces.

The President later held a tete-a-tete with his host at the Sheraton Conakry Hotel before each leader led their various delegations into bilateral talks.

Later, the two leaders witnessed the signing ceremony of bilateral agreements between their respective countries. President Museveni was later awarded a medal by his host.

President Museveni’s visit to Conakry is in reciprocation of a visit by President Conde in June last year to Uganda while he was chairman of the African Union during which the two leaders discussed the acceleration of the implementation of strategic issues of high importance to Africa. The two leaders had also called on African leaders to push for non-sectarian tendencies to avoid conflicts and confrontations in situations where there where problems.

The two leaders are expected to follow up on the push for the strengthening of the African Renewable Energy Initiative Agency for access to cheap energy and conflict resolution on the continent.

The President and his host were expected to visit the Kaleta and Souapiti dams, about 120km north of the capital Conakry, but the trip was cancelled due to bad weather. The leaders instead watched a recording of the dams construction. The Kaleta dam the biggest in Guinea for now holds 23 million of cubic meters of water and it can produce 240 megawatts at its maximum capacity. The country is also due to unveil another dam, the US$1.5 billion Souapiti hydroelectric plant located on the Konkoure River and is expected to double the country’s power supply when complete. Guinea is estimated as having one of the larger hydroelectric power potentials in West Africa, with a capacity of around 6,000 MW yet to be d