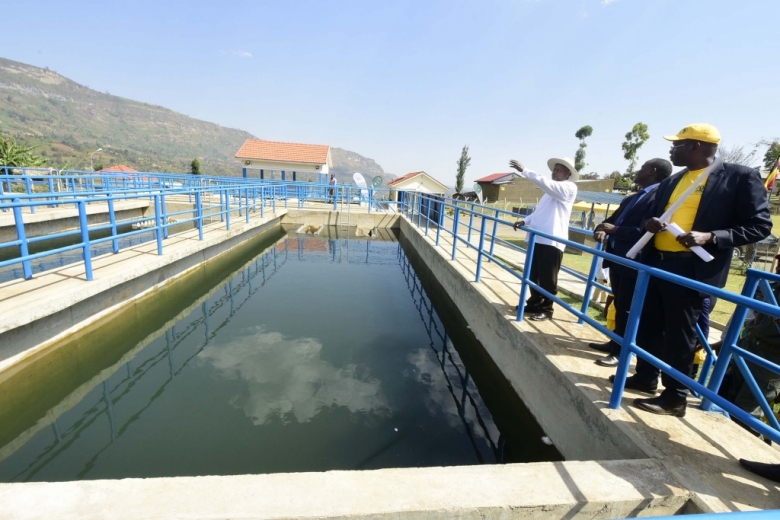 President Yoweri Museveni has called upon the people who are settled along the slopes of Mt. Elgon in the Bugisu Sub-Region, Eastern Uganda, to preserve the environment.

He said that cutting down the forests along the slopes of Mt Elgon, which is locally known as Mt. Masaba, will affect rainfall formation thus leading to long dry spells.

“When we say do not remove the cloth of your mother and you insist on doing so, you will give us bad luck,” he said.

President Museveni told the people that God did not only stop at making the mountain but went ahead and put there water on it. He said that the role of government is to improve the water through treating it so that the people can use it.

“This water has been there all this time but because of the instability, we were unable to develop it. Now that we have security, we only have to put there some chemicals to kill the dirt in it,” he said.

In order to accelerate access to clean and safe water the Ministry of Water and Environment, through the Directorate of Water Development, is supporting districts in planning and development of large gravity flow schemes for improved water supply in rural areas across local government boundaries.

Construction of Phase 1 was implemented with funding from the African Development Bank under the Water Supply and Sanitation Program 1. Phase 1 has installed water supplies in the Sub counties of Bukokho, Bumbo, Magale, Bubutu, Bunabwana, Butiru and Sisuni.

President Museveni further said that only 40% of the water will be for domestic use while the 60% will be for irrigation in the future.

“We can use the 60% so that we do not have dry and wet season but rather only the wet season,” he said.

The President also presided over the groundbreaking ceremony of Lilima Large Gravity Flow Scheme Phase II which will be implemented with funding from the government of Uganda and the African Development Bank under the Water Supply and Sanitation Program II and it will cover selected Sub-Counties of 3 districts of Manafwa, Tororo and Mbale.

Later, at a separate function, President Museveni launched the Women’s Savings and Cooperative Organization (SACCO) in Manafwa District Council to which he contributed Shs.10 million and promised to send Shs.40 million more to that SACCO. He also he told the people of the area that the Lirima Large Gravity Flow Scheme would make them access cheap and clean piped water.

He noted that their water source being on higher level ground assisted much in the elimination of costs of pumping the water thereby making water cheaper to access compared to Kampala district areas that require to have water pumped to them. He said that the only costs incurred in the Bugisu Sub-Region would be buying filters to remove germs from water.

“The NRM has been operating in Masaaba land for a long time and whatever we say we will do turns true. We said we would remove bad government and we did it. We said that we would stop cattle rustlers who were disturbing you from Pokot in Kenya, Karamoja and Sebei. We did. We talked about water for a long time and now it is connected,” he said.

The President encouraged the people in the mountainous areas to start growing grapes and apples because of the conducive climate in those areas. He assured them that they stand to reap enormous profits from fruit farming.

He assured wananchi if they cultivate the stipulated fruits and combine that with the recommended four acre-model of production, they would accumulate wealth and be free from household poverty.