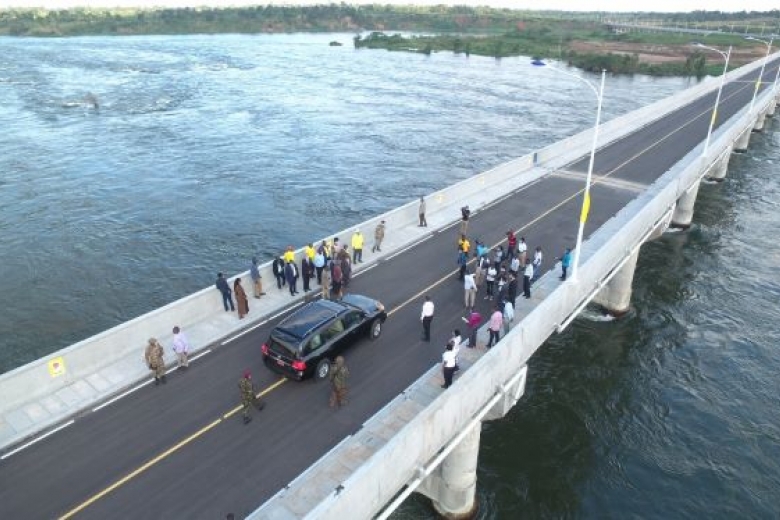 President Yoweri Museveni has  commissioned the newly completed Isimba Bridge comprising two bridges with one measuring 435 metres and the other 475 metres, both linked by a road at Koova Island on Lake Victoria connecting Kayunga and Kamuli districts.

“For the last 25 years, I have visited the whole of Uganda to sensitise you about each ones responsibilities (Lubimbi). I told Ugandans that there are responsibilities of government and those of individual Ugandans. Everything we have been doing including bridges, hospitals, power stations like Isimba, the road from Mukono-Kangulumira-Jinja.. all these are government responsibilities. It is good that you are happy about what government has done. But as individuals, you have your own responsibilities including fighting household poverty,” he said.

The President said for the last 30 years, he has been trying to sensitize Ugandans against working for the stomach alone but also for an income using infrastructure that government has put in place to improve their livelihoods.

“There are four things that you must do; fight household poverty; Secondly keep yourself healthy by avoiding HIV/AIDS, Corona, alchohol, irresponsible lifestyles by rich people like overweight etc, Thirdly keep the peace, don’t riot and disrupt your country. Lastly support the NRM because all these developments have happened because of NRM,” he said.

The President said the Bbale-Ggalilaya road will also be worked on. Using the bible story of Jesus and his disciples, who panicked during a storm when, he fell asleep.

“When he woke up, he said you of little faith…don’t have little faith, we shall work on that road. You remember the Mukono-Kayunga-Kangulumira-Jinja road was old, we renovated it and you witnessed. The one of Jinja was also renovated. The road to Mukono-Katosi-Nyenga-Mukono-Jinja is now complete. Even this will be done. Don’t have little faith like those disciples,” he said.

The President also said there would be another bridge from Sezibwa connecting to Buruli.

The UNRA Executive Director Allen Kagina said the bridge is able to accommodate all nature of traffic including double-container trailers which the Mbulamuti ferry could not accommodate.

“The previous challenges encountered using a ferry including the increasing water levels of River Nile have now been solved. By using the new Isimba Public Bridge, the usual route to Kamuli and Eastern Uganda via Jinja will be significantly shortened by two hours. We now anticipate that transportation costs and travel time will be considerably reduced,” she said.

Later, the President commissioned the newly refurbished Kayunga 300 bed capacity hospital. Government secured 70 billion shillings to renovate and expand the hospital including the expansion and renovation of the old buildings and construction of an emergency department, administration block, theatre, out and in-patient wards, 130 staff houses, sewage lagoon, laboratories, radiology, pharmacies and a blood bank.