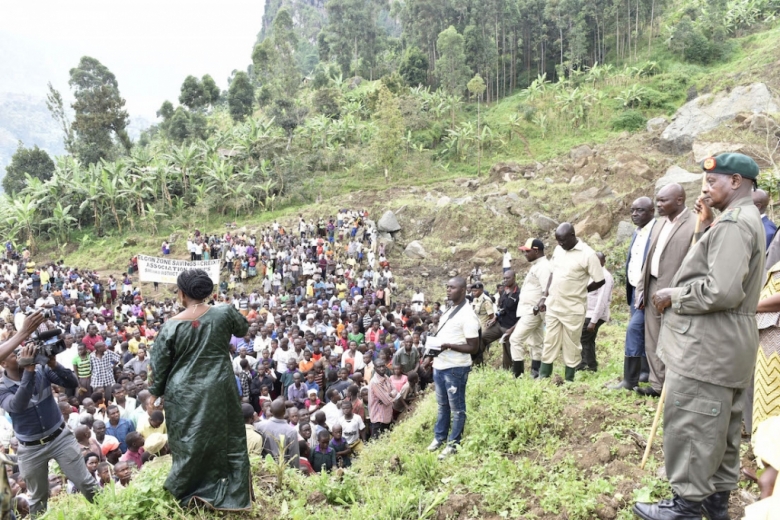 While condoling the people of Bufupa and Masaba sub county, President Kaguta Museveni warned people to vacate settlements that are close to the mountain cliff, adding that government is going to resettle people living in the mountainous region to avoid future disaster.

"Government tried to resettle you people in Bunyoro but you refused. Now we shall settle you within your areas but as long as you settle 500 mtrs, away from the cliffs because these mountains are waiting to kill you," President Museveni said.

He also encouraged wanainchi to use the mountain cliffs to grow trees and plant perennial crops rather than using them for settlement.

Later President Yoweri Kaguta Museveni addressed a huge rally at Masaba SS where he told the wanainchi that the huge boulder/stones in the mountains will be blasted to make good roads that are nearly impassable during a rainy season.

"There are very many stones on this mountain waiting to kill you people, but instead of these stones being a problem, we are going to blast them to make good tarmac roads," he said, adding that government now has funds to tarmac the Mbale-Sironko road.

The President also warned residents against environmental degradation. “This Masaba mountain looks after you like a mother but it is a taboo to see your mother naked or you can get cursed. God gave "cloth" to our mother Masaba in form of forest cover and grass, it is therefore wrong to cut the forest, because it leaves the mountain bare with little to hold the soil, making it susceptible to land falls.