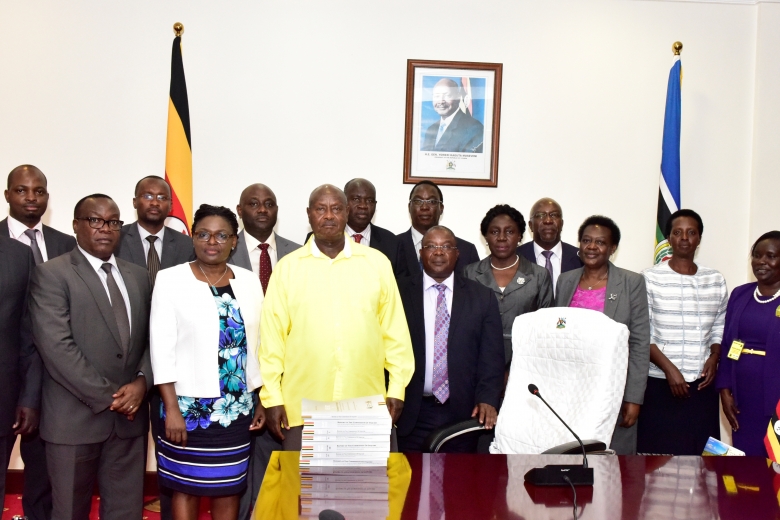 President Yoweri Museveni has vowed that those who were involved in the mismanagement of the Uganda National Roads’ Authority (UNRA) road construction contracts in the country, will be hunted, adding that the submitted probe report has no guess work and the unpatriotic practices must stop.

The President was receiving a 1300 page Commission of Enquiry Report into allegations of mismanagement and corruption practices in UNRA. The function took place last evening at State House, Entebbe.

The assignment that led to the compilation and production of the report covered a period of 7 months, manned by 7 Commissioners who were led by its Chairperson, Justice Catherine Bamugemereire who is also a member of the Court of Appeal, highlighted the major UNRA road construction mismanagement as rampant corruption, inflated costs that are termed as ‘inside dealings’, unnecessary delays causing prolonged work, inflated compensations to beneficiaries who colluded with staff members, hiring expensive office premises countrywide, road works machinery repairs and maintenance, among others.

Mr. Museveni commended the UNRA commission of Inquiry members for a wonderful job saying that the report will make the follow up of culprits easy. He said that the report has shown inflated costs and the magnitude of the loss to the country.

“We are going to crash corruption. We will not tolerate this practice just like we fought the past bad regimes,” the President emphasized.

Mr. Museveni further said that the report would simplify the task of Government in handling the thieves whom he described as rats. He stressed that the conduct of stealing from public resources must stop. He, therefore, reiterated the need to have timely inspections of the various Government programmes. He reminded the members of the Commission of Inquiry that if inspection is not carried out, it leads people into temptation. He reminded Accounting Officers and political leaders of their duty to ensure proper utilization of Government resources.

The President noted that the deterrent effect of the work done by the Commission of Inquiry is important adding that it is good to have an inter-agency forum in order to cause effect in the fight against corruption and mismanagement. He reiterated the importance of virtue of integrity.

The Chairperson of the Commission, Justice Catherine Bamugemereire revealed that the Government provided Shs.9 trillion to UNRA over a period of 7 years dedicated to the construction of various roads throughout the country.

“The Agency was able to supervise the construction of roads covering a distance of 1,500 kilometers. But the funds spent on the roads during this period, were sufficient to provide the country with a total of 5,100 kilometers of bitumen and paved roads. This figure was a big loss to the country,” she noted.

Justice Bamugemereire cited some cases in neighbouring Rwanda and Ethiopia where minimal costs on road construction have been realized. She reported that the new UNRA Administration has recorded a lot of progress since it took office in April 2015. She disclosed that the UNRA management team has ensured effective management of the axle loads, noting that the measure has facilitated Government efforts to prolong the life span of roads in the country. She, therefore, commended the Government for the sound decision of instituting UNRA.

The Commission of Inquiry recommended that Government should open up contracts to competent global companies and that the Government also should break up the cartel formed by various contractors that many times mint a lot of money before the actual work kicks off.

Justice Bamugemereire expressed confidence that the recommended measures in the Commission’s final detailed report would ensure value for money in the roads’ construction sector in Uganda.

Giving one of the outstanding examples of gross mismanagement in the roads building sector in the country, Justice Bamugemereire quantified the loss that Government suffered during the construction of the Tororo – Mbale road at Shs.11 billion with no work done at all while the Government lost another Shs.31 billion for the prolongation of services covering the Tororo – Mbale – Soroti road section.

She revealed that another contractor, namely Energo, has spent 7 years on the construction of the Kawempe – Kafu road without any value for money being achieved noting that the work was not complete and was also badly done. She recommended a 30% inclusion of Ugandan trained personnel in all the roads’ contracts awarded to foreign companies. She said that the move would enable the country to build capacity in the roads sector.

The Commission also commended the input by Inter-Governmental Agencies that gave hand in the accomplishment of the work of the inquiry namely; the Auditor General, the Inspector General of Government (IGG), Public Procurement and Disposal Authority (PPDA), CIID and Directorate of Public Prosecution (DPP).

The Minister of Works and Transport, Mr. John Byabagambi and the Executive Director of UNRA, Ms. Allen Kagina, attended the function.