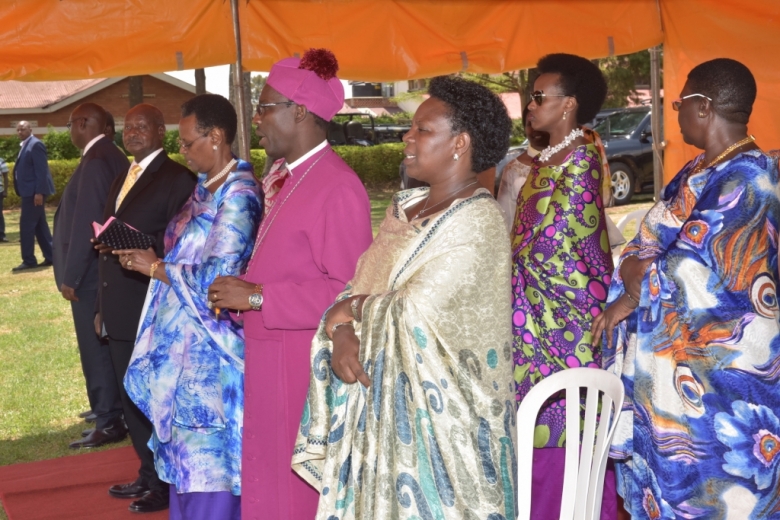 President Yoweri Museveni has commended Revival Churches for enlightening the people on backward and communal practices in society that were unhygienic as well as helping in the realization of literacy sensitization and the need for food security in people’s localities.

The President, accompanied by the First Lady and Minister of Education and Education, Hon. Janet Museveni made the remarks this afternoon at the closing ceremony of a one-week religious convention for the East African Revival in Ankole. The ceremony was held to commemorate 80 years since the inception of the Revival Churches in 1936, at St. James Cathedral Ruharo, Ankole Diocese in Mbarara district.

The convention that ran on the theme of ‘Jesus Christ our living Hope’, attracted different categories of people and the clergy from Uganda, Tanzania, Kenya, Rwanda and the United Kingdom, among others.

“After the introduction of religion in Uganda in 1877, the first church jubilee took place in 1949, which I personally attended when l was young. Since then I have witnessed the church enlightening the masses on bad communal practices, literacy and food security. But up to 1960s poverty as a subject affecting many people was never addressed at all. I could not agree with the church preach that earthly treasures are useless. The church stressed that life is in heaven and that we are only visitors on earth. Now I urge you to follow the Biblical proverb of the story of talents to multiply resources by establishing income generating activities at household level,” he stressed.

He, therefore, advised the clergy to devise improved ways and tactics to reach the youth massively beyond condemning bad traits and cursing sin.

“The Church should help me sensitize the people. Reach out to the youth. Some of them don't have parents and as such they need guidance. The Church and NRM have a big challenge,” observed the President.

The President strongly advised the people to preserve and protect the environment saying that the current prolonged drought season is a result of the destruction of wetlands. He said that the destruction of wetlands is against God's creation on environment. He also encouraged farmers to apply simple irrigation methods by pumping water to higher altitude and use pipes to supply water for irrigation of farms using water gravity flow method.

Earlier, President Museveni commissioned the East African Revival Museum at the Ankole Diocesan headquarters at Ruharo. The museum has the objective of preserving and exhibiting various items about the Christian faith and heritage.

The Bishop of Ankole Diocese, the Rt. Rev. Dr. Sheldon Frederick Mwesigwa, saluted the people of Ankole and Kigezi Sub-Regions for embracing the Revival Movement in 1936 saying that it helped them put development ideas in reality leading to the realization of positive and progressive achievements.

He revealed that Ankole and Kigezi as a region will in one year’s time open a radio station with the objective of educating and deeper sensitization especially of the youth and all people on issues of faith and development.

The Bishop led the congregation in a special prayer for the revival witnesses in Ankole Sub-Region who are above 90 years old and also prayed for the President and his family members.

North Kigezi Bishop Emeritus, Dr. Edward Muhima, who delivered the sermon, called upon Ugandans to thank God for the prevailing peace, rule of law, stability and above all the gift of fertile soils, natural resources, water and the beauty of the country.

Dr. Muhima said that sin is reflected in such vices like corruption, domestic violence, cannibalism and child sacrifice, among others. He added that those negative actions serve as a fundamental reflection of the poor and broken relationship between human beings and God their creator. He also urged people to learn to forgive and to cherish strong religious foundation.  ENDS