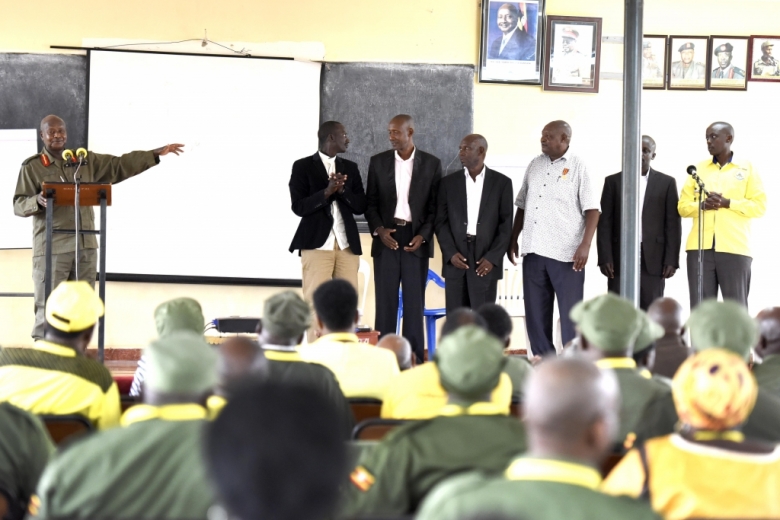 “This is to embrace socio-economic transformation interests and to handle obstacles the dairy farmers face. The issue of market for beef will be solved by having more abattoirs,” he said.

President Museveni was this morning presenting a sampled six-man group of local farmers with their convincing testimonies who practice cattle keeping to Cabinet Ministers, NRM Central Executive Committee members and Permanent Secretaries, who are currently on a retreat at the National Leadership Institute (NALI) at Kyankwanzi in Kyankwanzi district.

The purpose of the President in presenting the farmers to the retreat participants was to enable Ministers, NRM CEC members and Permanent Secretaries listen to the farmers’ testimonies directly that they have progressively shifted from being traditional cattle keepers to nearer commercial farming to improve on homestead income as they implement the NRM government campaign of Operation Wealth Creation.

Mr. Munyawera John, formerly a Grade Three Primary School teacher, who led the farmers’ group that comprised Mr. Atanasi Bwasisi, Mr. Mutabazi David, Mr. Benon Kabingore, Mr. Steven Otungure and Mr. Kamunti George, testified to the Cabinet Ministers, Permanent Secretaries and NRM CEC members who are on the retreat, that their shift from poverty-line to being close to middle class income earners by raking in over Shs.20 million per month, is a true revelation through the campaign to eradicate poverty at household level as initiated by the President.

“I keep dairy and beef animals, cross Boer goats and grow matooke, maize, beans on a large scale. When I left teaching and shifted to cattle keeping, I began producing 20 litres of milk by late 1980s. Now, I produce 300 to 400 litres of milk out of crossed high breed cows that fetch me over Shs.60 million besides the sales from crop produces and beef animals.” Mr. Munyawera testified.

Farmer Munyawera, who hails from ranch 8 LC1 village, Lwemigada Parish, Kyankwanzi Sub-County in Kyankwanzi district, runs his farming activities on 3 miles of land for dairy, beef animals and goats and 540 acres for crops.

He employs 20 permanent workers and 60 casual labourers. He has educated all his 14 children, lives in a well-furnished residential house and owns commercial houses.