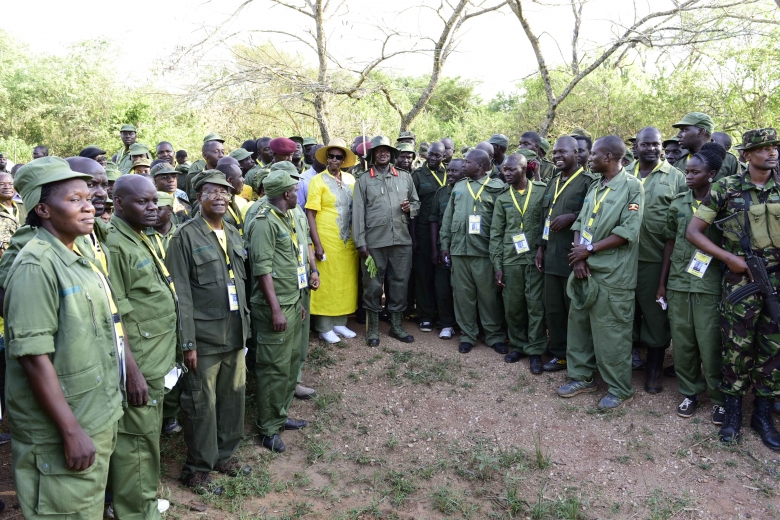 President Yoweri Museveni, who is also the National Chairman of the National Resistance Movement (NRM), has closed the 10-day Retreat of the newly elected National Resistance Movement Members of Parliament, with a strong appeal to the new legislators to selflessly work and sacrifice for the good of Uganda. He said that they should borrow a leaf from the then National Resistance Army (NRA) liberation fighters who sacrificed, fought and liberated the country from dictatorship.President Museveni, who was accompanied by the 1st Lady and Karamoja Affairs Minister, Hon. Janet Museveni, further advised the legislators to emulate NRM freedom fighters who, at no pay, personal gain or reward, and without guarantee of life, sacrificed and fought for five years and liberated Uganda. He said that their sacrifice accounts for the development that the country is experiencing today. “You are here as leaders today because of the sacrifices of your people who paid a heavy sacrifice to bring about this politically enabling environment in Uganda that has brought you into leadership. I always invite you to this part of the country so that you appreciate the sacrifice your people endured at no pay, personal reward or benefit or guarantee of life, to liberate the country and create the environment so that you may be motivated to work and sacrifice for the development and good of Uganda,” he told the legislators.The President was speaking at Ngoma Presidential Farm in Nakaseke district last evening during the closing ceremony of the Retreat for the newly elected NRM MPs. The 10-day Retreat has been taking place at the National Leadership Institute (NALI), Kyankwanzi in neighbouring Kyankwanzi district.Mr. Museveni told the MPs that the NRM liberation struggle succeeded because of the spirit of voluntarism, sacrifice and selflessness by the freedom fighters that was mission driven. He, therefore, urged the current leaders in the country and the youth as well, to appreciate the lessons from the vast experience of the freedom fighters for the good of Uganda.“If you nurtured the spirit of selflessness and sacrifice in the current situation where Uganda is, you can move mountains and transform Uganda in the shortest time possible, into a middle income country,” he said.He noted that to transform Uganda, all leaders and stakeholders must re-dedicate their efforts and work to ensure that all households in Uganda shift from subsistence to commercial and profit oriented agriculture in order to ensure that wananchi realize better financial earnings.The President also called on the new MPs and all categories of leaders in the country, to join hands and sensitize the population on the danger posed by the continued backward practice of land fragmentation on account of poor and negative inheritance rites. He said that the practice not only poses great danger to the future of agriculture but will also result in irreversible poverty in the country where more than 80 % of the population’s livelihood is dependent on agriculture for food, income and employment.“The Bible says that the nation without a vision perishes. If you continue fragmenting the land and we have no more land for agriculture, where will you grow food to feed the population,” he wondered.Mr. Museveni, therefore, called on all leaders at all levels to sensitize the masses to stop the continued practice of land fragmentation and encourage families to share the income accruing from their consolidated pieces of land and not physically share land itself.Meanwhile, the National Resistance Movement newly elected MPS have passed a number of resolutions which they said will be availed to the different NRM Party organs for consideration and implementation in the political, economic and social spheres of Uganda as well as those that are aimed at strengthening the Party cohesion, discipline and performance.Among the resolutions, the MPs recommended the introduction of compulsory national service for the youth upon completion of their education; publication of quarterly review on the performance of government loans; increasing the funding for agro-processing so as to add value to all the country’s agricultural produce; establishing credit facility for crop finance and considering the creation of the Stabilization Fund for the agricultural sector.Regarding the health sector, the MPs’ resolution emphasizes sensitization of the masses on the danger posed by avoidable yet dangerous diseases, such as Hepatitis B, and putting in place national health mechanisms to halt those diseases.They also recommend that a review should be made on the just concluded national elections noting that the Party needed to study and implement the recommendations of the Seninde Report on the NRM Party Primaries.The Prime Minister, the Rt. Hon. Dr. Ruhakana Rugunda and the Secretary General of NRM, Hon. Kasule Justine Lumumba, also addressed the closing ceremony. Second Deputy Prime Minister, Moses Ali and 3rd Deputy Premier, Ali Kirunda Kivejinja, attended the closing ceremony. ENDS