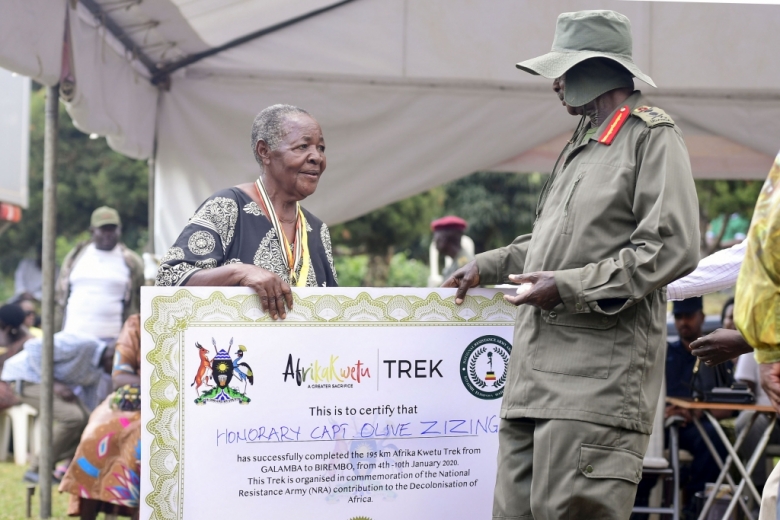 President Yoweri Museveni has called upon the Bazzukulu to prepare ideologically and physically to continue the struggle of developing the nation.

The President was speaking at the closing ceremony of the ‘Afrika Kwetu’ Trek at Bireembo Technical Institute in Kakumiro District, the last stop and campsite of the 6-day Trek that kicked off on 4th January at Galamba in Wakiso District and ended yesterday.

“You the Bazzukulu, your challenge is to study the ideology and discipline of the NRM. You must then preserve your life and don’t squander it. Remaining healthy is part of the war. You are wondering how an old man can climb the hill. It is because am fit! I don’t want you to do something that your body cannot allow. Don’t be like a flag that is just blown which ever side,” he said.

The President, who congratulated the Trekkers upon successfully completing the journey, advised them to seek to develop themselves and the country. He reiterated that they should think of ways of creating businesses in the hills - like fitness centers and agriculture industries.

Giving a brief history of Bireembo, President Museveni said that his first time in the area was through an invitation by the people. He noted that the battle that took place at Bireembo was among those that brought a new force of change on the African scene.

The battle, he continued, was one that sought to give Africans absolute power to rule themselves and utilize their own resources.

“It was part of a new force chasing colonizers from Africa. Here, independence had come but it was the independence of the flag. This was because of the internal conflicts based on sectarianism, gender chauvinism and religious differences and so this battle sought to change this,” he explained.

President Museveni thanked the officers, led by Alice Kaboyo, Senior Presidential Advisor on NRA, president’s senior advisor on NRA for successfully organizing the trek which had helped him recall a few memories that he had forgotten.

“I want to thank Alice for persisting with the trek. Through this, I was able to sit down to write and retrace the routes of liberation. Some of the stories that people told me, I had never heard because I only know a few of those were I was involved. I will give support to commanders to write their own stories that have a different angle,” he said.

President Museveni awarded a few of the trekkers for successful finishing the 195kms of the trek, among which was Lieutenant General Nalweyiso Proscovia.

President Museveni, the chief trekker was also presented an award for having been an excellent pace setter for the trek and leading it.

Present at the ceremony was the First Lady and Minister of Education, Janet Kataaha, Prime Minister, Ruhakana Ruganda, Ministers, Members of Parliament, army leaders, among others.