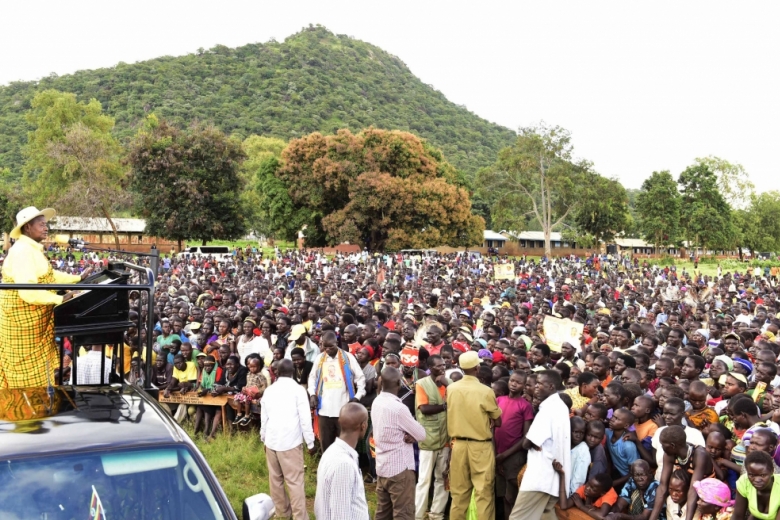 President Yoweri Kaguta Museveni today was in Karenga Subcounty, Dodoth West in Kaboong District, where he was campaigning for Ms Rosely Akello Nakwera, the NRM flag bearer for the district Woman MP seat.

Speaking to Wanainchi at Karenga Boys Primary School grounds, the President said that when you support the NRM, you are supporting functions like Peace,Health, Education, and development.

Regarding Peace, President Museveni who is also the Chairman of the National Resistance Movement said that Kaboong district and Karamoja region as a whole is now peaceful and this has enabled other government functions to progress unhindered "Once you support peace, we deal with health, for example when there was no peace ,we could not immunise . The infant mortality rate in karamoja was high, but now this has reduced, If you could deal with other things like hygiene , nutrition, we will eliminate most of the sicknesses."

"The young people should know that health is wealth, when you are healthy, you can do a lot"

On Education, President Museveni informed the gathering that government is to increase the number of schools in addition to those that already exisit.

The President told Wanainchi that for the first time in the history of Karamoja region, there are tarmacked roads in Karamoja. "The road from Moroto-Nakapiripirit, is complete. We are now working on the Nakipriprit-Mbale road, Soroti-Napak-Iriri- Moroto and the Moroto-Kotido, Moroto- Kabong roads.”

The government has also given districts,  road construction units, and these will take care of the murrum roads, so that we don’t wait for tarmac roads, said the President.

The NRM Chairman called upon the people of Karenga to embrace government programs geared to improve house hold income. He asked them to use Operation Wealth Creation as a spring board for creating wealth in their homes, using the seedlings and livestock that are given out under OWC to engage in commercial agriculture.

President Museveni assured the people of Kabong that electricity will soon be extended to Kotido and Kabong districts. He thanked the people of Karenga for coming in large numbers to listen to him and urged them to vote for the NRM candidate in the forthcoming elections.