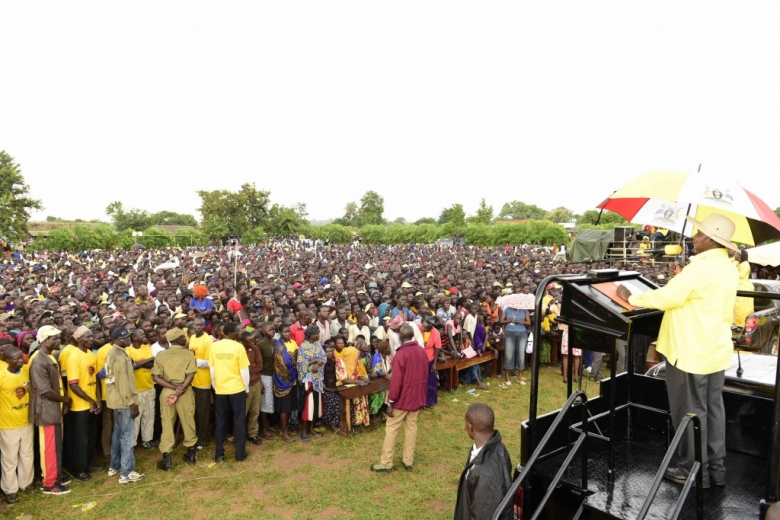 The National Chairman of the National Resistance Movement (NRM), President Yoweri Museveni, has cautioned independent candidates in Toroma Constituency in Teso Sub-Region, against spoiling the vote in the forth-coming by-elections; describing the act as indiscipline.

“I don’t encourage independents. That is indiscipline. If you are members of the same team, why should you struggle for the same ball? We don’t want ‘amaria’ (struggle in Ateso).

President Museveni was this afternoon drumming up support for the NRM flag bearer, Joseph Koluo, in the by elections to take place on Thursday 18th May 2017 in Toroma constituency in Katakwi district, Teso Sub-Region. The constituency seat fell vacant in Parliament following the demise of Hon. Silus Amodoi who died in a road accident on the 14th March 2017.

One of the candidates, Mr. Ediangu stepped down for the flag bearer Mr. Koluo.

The NRM Chairman added that Forum for Democratic Change (FDC), that does not have solutions for the concerns of the people, should not be given room to take that seat.

President Museveni also reminded the people of the area of the work plan of NRM that stands for the truth unlike other groups that specialize on feeding the population on lies. He told the cheering crowd that NRM does programs step by step, not all at once. He said a person who tells people that all problems can be solved at once, is a liar and an enemy of the people and the country.

‘Idiope-idiopet ne eyauni aibunget’ in Ateso meaning one by one makes a bundle. He said the major issues of NRM that have been achieved include peace, development, wealth creation and doing things one by one.

President Museveni also cautioned the people of the area against depending on food relief stressing that it should act as a helping hand while they grow their own food crops.

On the concern of the land in the parish of Angisa, President Museveni assured the people that the problem will be sorted out.

On the issue of money allegedly being collected by some people from wanainchi for cattle compensation, President Museveni said he is not aware of that exercise and if it is being done it is wrong. He explained that compensation is the work of the government.

The President, who enumerated NRM achievements in Katakwi district in the social and economic sectors, urged wanainchi of the area to concentrate on wealth creation in each household.

He assured them of the government’s plan to introduce irrigation systems to mitigate the dry spell that at times occurs in the country.

Later, President Museveni laid a wreath on the grave of the late Amodoi in Kanapa village in Magoro Sub-County.

President Museveni also addressed another rally at Toroma sub-county headquarters where he urged the electorate to send to Parliament an NRM candidate for better work out put.

He told the huge gathering at Toroma Primary School grounds that it is only the NRM that has solutions to people’s problems.